Retail trading has gained in popularity over the last 10 to 20 years. That’s no surprise considering the increasing availability of commission-free trading, mobile trading apps. That’s not to dismiss the almost 2-year lack of alternatives to spend money on during the COVID restrictions. Increased retail trading led to adventurous excesses, which we observed in the boom of meme stocks and the crypto market.

The one stock that stands more for this crazy time than any other asset is Gamestop (GME). While squeezing some institutional short-sellers is fun (congrats if you were one of the lucky ones buying GME at $10 and selling at $250), most retail traders entered the trade way too late, buying into a highly inflated price.

And it’s not only meme stocks: retail traders are notoriously poor stock pickers and timers. The average retail trader buys too late and does not hold long enough. Retail traders, as a whole perform poorly and one can make money trading against the retail trader sentiment.

Using a dataset called the Retail Trading Activity Tracker from Nasdaq, we identified some widespread mistakes that retail traders make over and over again.

#1 Jumping On The Meme Train

The Reddit traders that call each other autists and apes are responsible for the sudden price increase in GME, AMC, BB, and other meme names – so we are told by financial media.

While there’s no doubt that the Wallstreetbets forum functioned as a catalyst that got the whole thing going, it isn’t retailer traders pushing the price up. According to data from Nasdaq, at its peak, retail made up less than 10% of the total volume traded in GME. That’s it!

Of course, other factors played a role, namely a vast short interest overhang. But the question is: who bought and pushed up the price?

In the following chart, it becomes evident that – against the standard narrative – retailers were selling while the stock initially soared and restarted buying at the top only.

On January 29 (when closing at over $300) and into the first days of February, the average retailer tried to catch the falling knife. The stock plunged to the 50s. As soon as the stock started soaring again on February 24 (closing at $91), retailers sold early. These were likely many that bought in the 300s, so they sold at an immense loss. Doing so made you miss out on the resurgence that followed.

So if the average retail stock trader timed the trade so poorly, and the majority incurred losses, who made money here? The hedge funds.

Very likely, many more are not listed in the institutional filings because they exited before the end of the quarter. Anyway, the pattern is clear.

Take-home message: Don’t be fooled by the crowd on the internet. While it can be fun to participate in a stock pump, timing is difficult. Just because the internet thinks hedge funds are getting squeezed doesn’t make it true.

#2 Being Overly Bullish After Earnings

We wrote about a trading strategy that is buying a few days before the earnings release here. Stock prices tend to go up after earnings are published. The main argument for this is that investors value certainty – no matter if the reporting was good or bad. Of course, this holds statistically only when looking at many stocks. 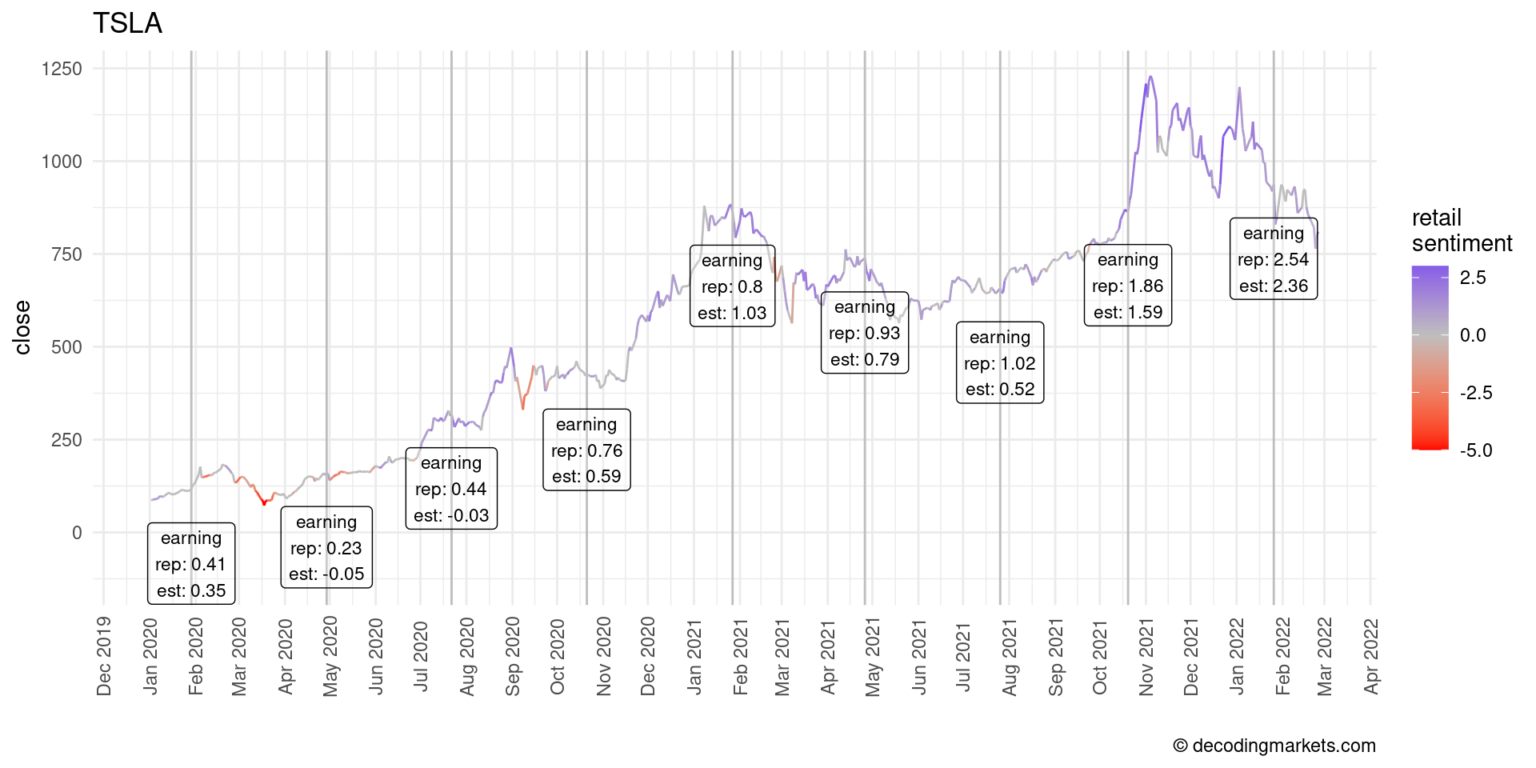 Why are retail traders bullish after a positive earnings release? Probably it’s the influence of the media. You’re more likely to buy Tesla stock if you’re reading the headlines that Tesla had a highly successful quarter. And that’s what retail traders do (but less so professionals).

To be fair, buying after positive earnings is not an entirely dumb move. For many years, one could have observed what’s called a post-earnings announcement drift. After earnings announcements, stocks often trend up (or down) for several days. This somewhat goes against the assumption that any news is priced in immediately.

Take-home message: Buying after a good earnings report can be profitable if there’s a post-earnings drift. However, you’re often late to the party – a typical mistake by retail traders. 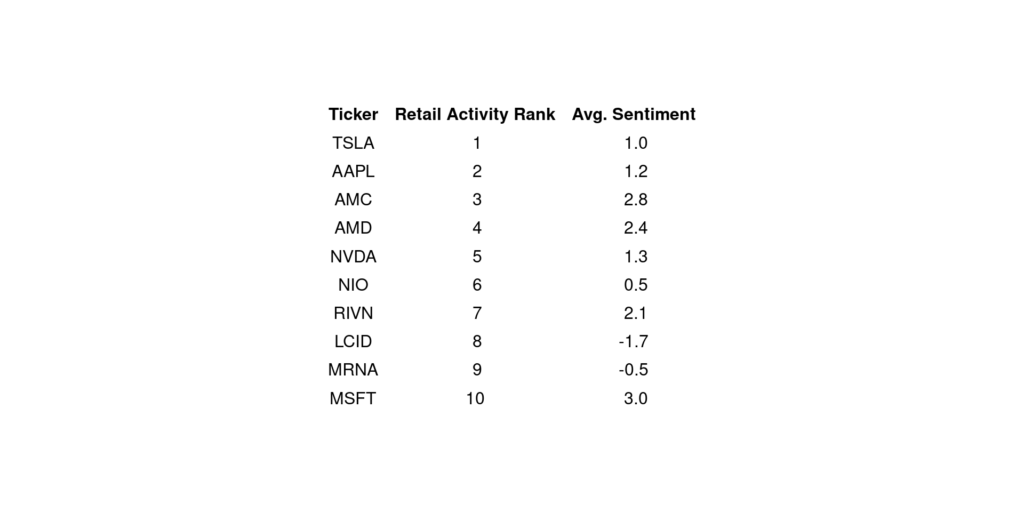 Obviously, it’s mostly the big names in tech, consumer products, and electric vehicles. All of these companies get massive coverage in (non-financial) media. At the end of the day, one trades what one is familiar with.

Researchers have found that stocks with no media coverage earn higher returns than stocks with increased media coverage. The reason is that what’s in the press tends to be overbought. It’s the same as buying toothpaste (or anything actually): The one brand you know from the ads is likely to be overpriced relative to what you get.

Take-home message: Expand your investment universe. The best opportunities might arise in stocks that are off the radar for the typical retail investor.

There are two central moments when retail investors sell investments: when they’re up and when they’re down. The first often comes too early and the second too late. It’s not the first time that we have written about this.

The cause for taking profits early is to be found in how our human mind is wired. People like to be right, and seeing green gives the satisfying feeling that one was right. By selling, one “preserves” the sensation of having been right, and no matter what direction the price takes from then on, you’re in the seemingly comfortable position of not being affected anymore.

Selling too soon makes you miss out on trending asset prices. If you look at any market chart, it becomes evident that prices tend to move in a particular direction for extended periods. Trend following is probably the most crucial concept every trader must be familiar with.

Below is a chart of Apple (AAPL) between 2019 and 2021. What’s remarkable is that retail traders sell (line turns orange) as soon as the stock price increases a bit stronger than usual. This is a clear sign of profit-taking.

Take-home message: Have a clear plan when to take profits. As a general rule, one should only sell when the stock becomes overvalued. And remember: the trend is your friend.

The last one is controversial. Should you buy dips or not?

A company’s stock that you like experiences a substantial price drop. Such a reduction in value could be a one-time opportunity to get it at a discount.

Below is a chart of Alibaba (BABA) to illustrate this. Notice how retail sentiment turns bullish during and after most price decreases. As it turned out, a fatal mistake, as post-October 2020, the stock knew one direction only – down.

We do not claim that short-time mean-reversion is not a thing. Mean-reversion can be a highly profitable trading strategy. But when applied in a rash on already high-valued stocks, the chance of not seeing a recovery is significant.

Take-home message: Buying after a price decrease is like catching a falling knife: it’s risky. Especially as a (relatively) uninformed trader, you might not even be aware of the valid reasons why others were selling.