10 Mistakes To Avoid When Trading Stocks

It is often easier and more useful to try and disprove something than to prove it is categorically true.

By running experiments we can learn just as much by understanding what doesn’t work as we can from looking at what does supposedly work.

I decided to run some simple tests on historical stock market data and I came to some clear conclusions.

What follows is a list of things that don’t seem to work when trading stocks:

By and large, it is easier to make money by trading less frequently.

This is clearly shown by an analysis of the historical data.

The following chart shows the average profit/loss per trade when buying S&P 100 stocks with different holding periods between 2000 and 2015.

(This data was simulated with Amibroker using data from Norgate. Here, commissions were not included but historical index members were.) 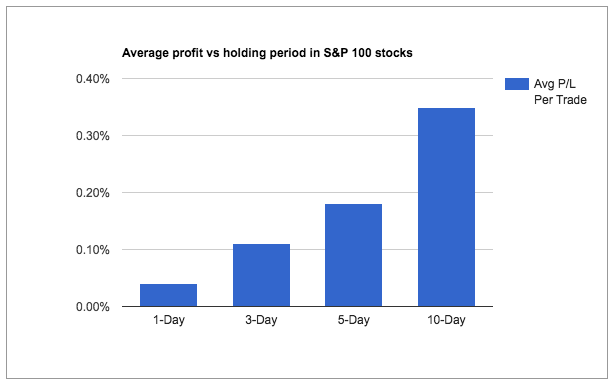 You can clearly see that as the holding period increases, profit potential increases.

The following table shows extra colour. As holding period increases, the number of trades decreases while the average profit and win rate increases – to the point where the profit is so small with a 1-day holding period that it is unlikely to cover transaction costs.

The implication is clear. Hold long trades for longer in order to capture greater profit.

On the flip side, short trades can be held for less time. (Just switch the numbers around to see it).

When using leverage it is important to minimise risk and one way to do that is with the use of stop losses, whether they be fixed stops or trailing stops.

But even if leverage is not used, stops still need to be kept far enough away to allow a trade to develop. Otherwise you run the risk of getting stopped out before your trade has had a chance to move into a decent profit.

In the following chart you can see how a fixed stop loss affects the performance of S&P 100 stocks: 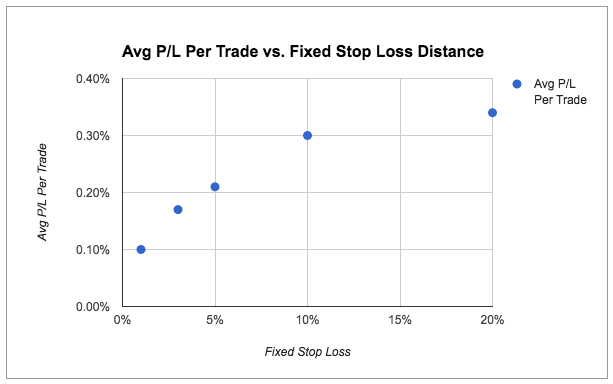 As you can see, the average profit increases as the stop loss is moved further and further away. (Again, this assumes no margin and no commissions.)

The table below gives some extra detail to this analysis:

Also, a similar story unfolds with trailing stop losses. Overall, it’s vital to give trades ample room to move. This has implications for position sizing too.

Despite these results, traders are advised to still consider stop losses in their trading (especially if trading on margin).

You only need a sprinkling of common sense to realise that risking all of your capital on one trade is a dangerous activity.

This is why the frequently recommended advice is to risk no more than one or two percent of capital per trade and to spread your risk over more than one position.

It all comes down to basic mathematics. The more you bet, the more accurate you need to be.

The following table shows the risk of ruin for a theoretical trading system with a slim edge.

This system has a payoff ratio of 1 and a win rate of 55%. There is always a risk of ruin in trading but betting small keeps the risk low:

The table shows a trading system with a payoff ratio of 1 and a win rate of 55%. Trading with 50% risk per trade (with this particular system) gives a risk of ruin of 67%.

Trading aggressively in this way is a quick way to lose it all.

It has been shown before that some trend following strategies do work in stocks.

However, stocks also exhibit a tendency to revert to the mean. This means that a number of potential breakout opportunities are in fact false breakouts and this fact can cause the inexperienced trader to encounter losses.

An analysis of the data shows that chasing big breakouts in stocks is not necessarily a winning strategy and that mean reversion strategies often perform better.

For example, the table below shows the average performance of S&P 500 stocks 10 days after a new daily high, or a new daily low, between 2000 and 2015. (Commissions are not included here).

Given the propensity for stocks to go up over long time frames, it is hard to find strategies for shorting stocks that stand up to historical testing.

I find that this is particularly true when analysis is limited to the use of popular technical indicators which do not seem to have much power of prediction except in some unique circumstances.

To prove this, I ran some tests using the back-tester on Finviz Elite.

I instructed the back-tester to short a stock whenever a certain indicator met the rules. These tests were run over 16,000 US stocks between 1996 and 2009 and were also survivorship-bias free.

The results for each technical short signal is shown below:

Notice how none of the short strategies tested were able to generate a positive average return over the historical time period. This reveals the difficulties of trading the short side in stocks.

A great number of the technical indicators I have tried show no edge over random trading. This is true for long trades as well.

Just as it is not wise to lock in losses too readily (what happens when you use tight stop losses) it is also unwise to take profits too early.

This rule is something of a trading cliche but the evidence does back it up.

The following chart shows the average profit/loss per trade from buying S&P 100 stocks between 2000-2015 where different profit targets are used. 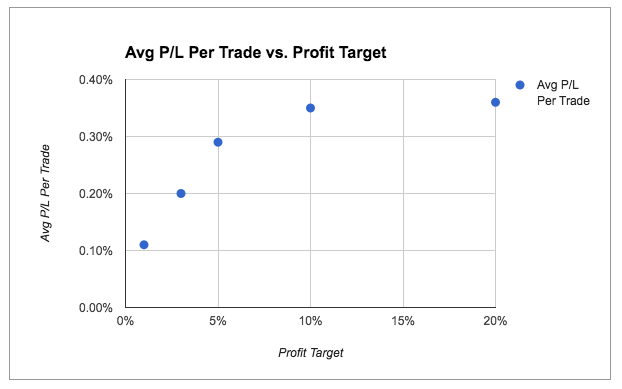 The table below provides extra detail to go along with the chart above. Remember that these initial tests are run without margin or trading costs:

The average profit from buying S&P 100 stocks with a 10-day holding period without any profit target is 0.35% per trade.

When a profit target of 1% is brought in, the average profit drops to only 0.11%. That return is probably not enough to cover the transactions costs involved.

Although tight profit targets seem to be counter-intuitive (they worsen average performance) they do lead to an increased win rate and there appears to be some merit in the 20% profit target (for S&P 100 stocks anyway) as it gave an increased average profit of 0.36% per trade.

As I reveal in my candlestick course, the hammer candlestick pattern has shown no profitable edge in stocks (or futures and forex for that matter) over the last 15 years, and this underperformance is summarised in the chart below.

The chart shows average profit/loss from buying the hammer pattern on S&P 100 stocks (on the close of the hammer) with various different holding periods. 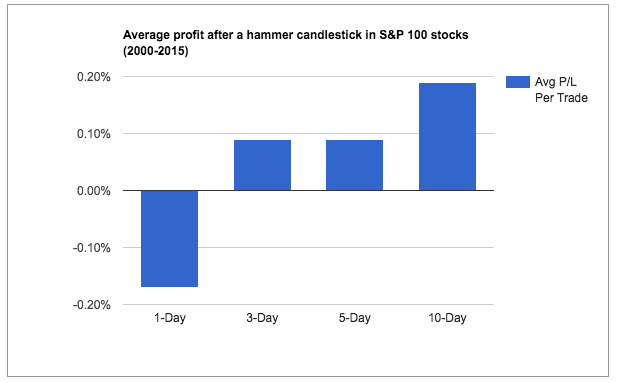 The following table gives some extra colour to these results:

As you can see, buying stocks after a hammer candlestick pattern occurred produced a loss of -0.17% per trade with a 1-day holding period and performed poorly over the other timeframes too.

Compare these results to the table in point one of this list and you will see that the hammer could not even beat the average returns as we recorded earlier (0.35% for a 10 day holding period).

We also recorded poor results for a number of doji candlesticks such as the gravestone doji.

I know some traders like the moving average convergence divergence indicator (MACD) but I have never been much of a fan. If moving averages are lagging indicators in themselves, it seems to me that MACDs can only add more lag.

Maybe there is some magic combination that works for the MACD but I have never found it and few of my experiments have shown a positive outcome.

The following equity curve shows a trading system that was produced with the back-tester on Finviz.

This system buys stocks from the Russell 3000 whenever the 12,26,9 MACD crosses over the zero line and sells when the MACD crosses under the zero line. The system is run between 1996 and 2015 and includes historical members and transaction costs of 0.05% per trade: 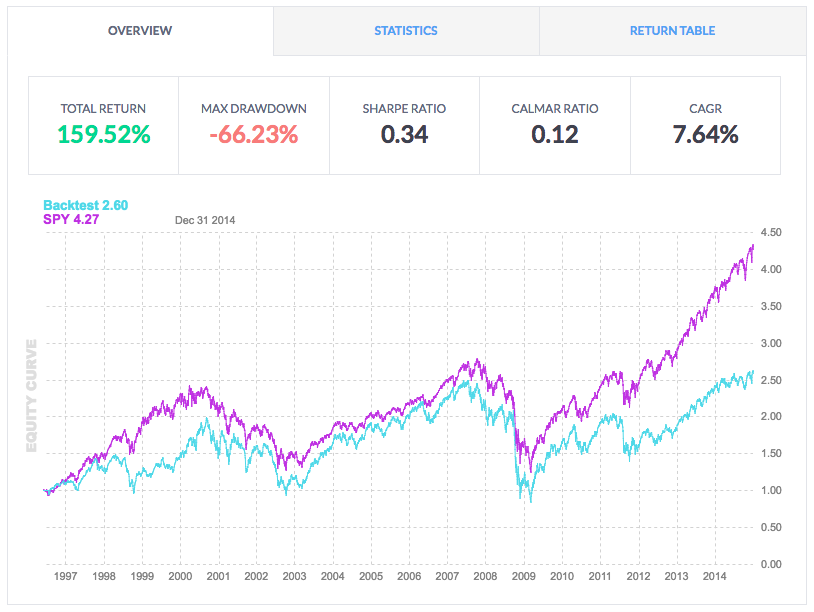 As you can see from the equity curve, the system (blue line) does end up in profit. But with a compounded annual return of 7.64% and a maximum drawdown of -66.23%, it performs much worse than a simple buy-and-hold strategy on the SPY ETF.

There is a fair amount of evidence to support the momentum theory in stocks, whereby previous winners carry on winning and previous losers carry on losing.

However, as usual the devil is in the details. Rotate at too fast a frequency (such as weekly) and the momentum effect can disappear.

To see this, consider the following trading system created in Amibroker.

This system buys the 10 best performing stocks in the S&P 500 from the previous week (percentage wise). It buys each one on the next week’s open and then sells at the end of the week on the close. The process is then repeated week by week.

The system was run as an equal-weighted portfolio on S&P 500 stocks between 2000 and 2015 with transaction costs of $0.01 per share and produced the following equity curve in Amibroker: 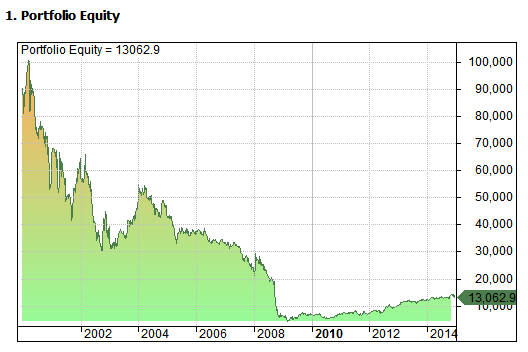 As you can see from the returned equity curve, the strategy of buying the 10 best stocks from the previous week leaks money. 87% of the initial starting capital was lost over the time period proving that short-term momentum is not always effective.

Unfortunately, it gets no better when buying the 10 worst stocks from the previous week: 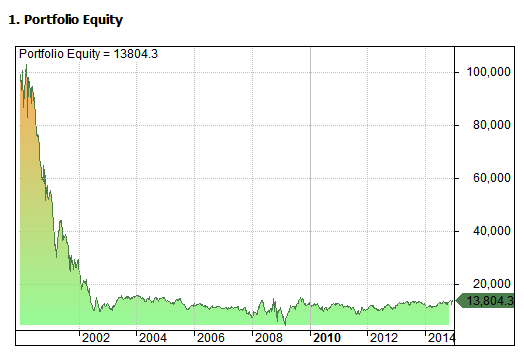 It’s fairly well observed that smaller cap stocks give a greater return than larger cap companies over the long haul. The reason given is that investors in small caps are compensated for the extra risk associated with those companies. 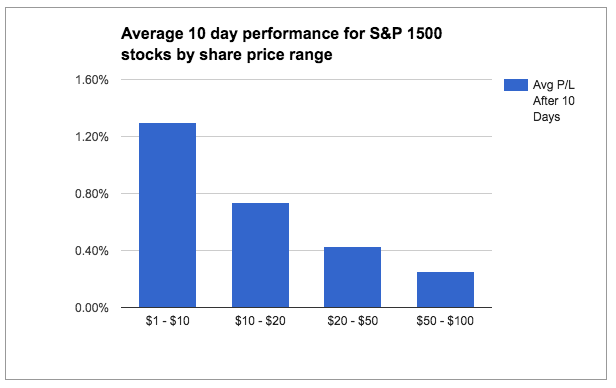 The chart shows how performance dwindles as the share price increases in dollar terms. The table below contains some of the raw data:

Granted, this does not tell the whole story as we cannot see the in-trade drawdown of these results and we are not using commissions. Larger cap stocks may exhibit less volatility which means they may accept greater position size.

Nevertheless, it seems likely that the smaller retail trader will find more success with the lower priced securities compared to the more expensive stocks.

Working out what doesn’t work is useful because it helps us focus on areas that may offer opportunities. So thank-you very much for reading this list of things that don’t work when trading stocks. It is also a summary of what not not to do in the stock market.

The list took a fair while to put together so don’t take everything as gospel. Mistakes can easily creep in and it’s always good to do your own research. But I do think the main points are valid and useful.

Historical simulations in this article run with Amibroker using survivorship-bias free data from Norgate Premium — except points 5 and 8 where I used the back-tester at Finviz Elite.

Some great insights, especially #2, thanks for sharing this JB

Great article! Thanks for putting in the time and energy to write this. I’m still looking for the fountain of youth but having a trading strategy is better than simply blowing in the wind. Beware the black swan. They would be interesting to graph – 9/11, Covid-19, global climate change, sun flares!

Amazing article with beautiful thoughts. The idea that you shared is really great and helpful. Thanks.