How Will Stock Markets React To The New President?

No matter your political view there is no doubt that the financial markets are more nervous about a Trump victory than a Clinton win. This is exemplified by recent price movements in safe haven assets like gold, the US dollar and stocks.

With the US elections less than a month away, it’s about time we started bracing our portfolios for the potential impact of this change in political leadership.

So far, opinion polls are suggesting that the tides are turning in favor of Democratic nominee Hillary Clinton, especially after the recent presidential debates with Republican nominee Donald Trump.

This is clearly shown in the online prediction and betting markets, shown below: 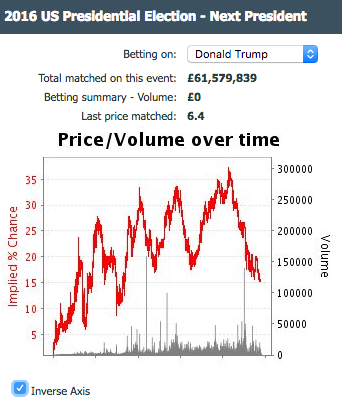 The implied probability on Betfair shows a Trump victory is around 15% at the present time. (This equates to decimal odds of around 6.4.)

In terms of campaign promises, Clinton has pledged to increase taxes on higher-income houses while Trump has promised a sweeping tax reform that would lower the corporate tax. Clinton has vowed to support more generous benefits for retirees and the poorest recipients of Social Security while Trump says he has plans to close the demographic-induced solvency gap.

Based on stock market reactions to changes in poll leads, markets appear to be more welcoming to a victory by Clinton rather than Trump. For one, the Republican nominee has had a flair for the dramatic and has been known to switch his statements every now and then.

This kind of uncertainty doesn’t seem to bode well for businesses and investors, which explains why US equity indices cheered the wider lead that Clinton enjoyed after the first presidential debate. Ahead of the highly-anticipated event, stocks trimmed their gains but the DJIA recovered 0.7% while the S&P 500 index advanced 0.6% and the Nasdaq rose 0.9% when Clinton emerged as the more favorable candidate.

Perhaps one reason for this is that Clinton has shared more details about her proposals, which champions higher tax revenues cycled into fiscal policy and infrastructure spending.

Trump, on the other hand, has called for massive cuts to the government budget which could cripple public services and restrictive trade policies that could hurt businesses.

Gina Sanchez of Chantico Global estimates that annual GDP growth could be at 4.8% under Clinton and just 3.0% under Trump, cautioning that the sweeping policies of the latter might even push the US back into recession.

She also projects that the S&P will return an average of 6.9% per year under Clinton and just 2.3% per year under Trump, compounded to 30.6% in returns for the former and 9.5% for the latter for the four presidential years in the first term.

The Stock Market After The Election

Historically, the stock market sides in favour with the Republican party as the Dow has been up an average of 4.2% per year when they are in control.

However, MFS reports that the DOW was up an average of 14.6% per year when the incumbent party, in this case the Democrats, wins. This is in contrast to a 4.4% annual decline when the opposing party takes control.

Either way, history has also shown that the markets end in positive territory during the election year more often than not, with some calling this the election effect.

What Analysts are Saying

Financial analysts are still very much divided on the issue and 89 out of the 100 Fortune CEOs declined to back either presidential candidate.

Eleven supported Hillary Clinton while none supported Trump, reflecting a sharp change from the 2012 elections when nearly a third of these top business heads supported GOP candidate Mitt Romney.

Clinton has raised $30,000 in donations from these CEOs, including Apple’s Tim Cook and Nike’s Mark Parker. Nineteen other CEOs have also pledged a total of $100,000 in donations to GOP candidates other than Trump earlier in the presidential cycle.

This goes to suggest that big businesses favor anything but a Trump victory, owing mostly to the racist and unacceptable comments that the Republican nominee has made against Mexicans and Muslims.

Strategists acknowledged that CEOs are hesitant to be associated with Trump out of concern for controversy and public criticism, signalling that  his victory might send more jitters across the financial arena. Besides, a sweeping overhaul in corporate taxes as proposed by Trump could complicate earnings reports, likely resulting in a repricing for stocks.

According to “Mad Money” host Jim Cramer, there won’t be any significant changes in the stock market regardless of which candidate wins. He explained that a sharp selloff could simply offer an opportunity to buy at bargain levels, likely allowing the market to recover before the end of the year. While Trump could bring a lot more uncertainty than Clinton, this might merely result in increased volatility and therefore a better buying opportunity.

Analysts in general state that the winner of the election doesn’t have as much of an impact on the economy as many believe. For one, the US Federal Reserve is set to make a huge announcement before the end of the year itself, as market participants are holding out for a potential interest rate hike on consistently improving economic conditions.

This might have a larger impact on the US dollar and stock markets in the longer-run than the upcoming election as higher borrowing costs could dampen business investment and consumer spending if investors think that tightening was done too early.

Will a Trump Victory Cause Stock Markets To Crash?

Despite the historical evidence and the views offered by financial analysts on this year’s election there is a strong tendency to believe that this time could be different.

No matter your political view there is no doubt that the financial markets are more nervous about a Trump victory than a Clinton win. This is exemplified by recent price movements in safe haven assets like gold, the US dollar and stocks.

Donald Trump is a loose cannon unlike any Republican candidate gone before and he has shown very little consistency in his statements or policies. His success seems to be based on fear mongering – appealing to primitive emotions rather than facts or rational thought.

Statements referring to trade wars are worrying for those who have studied the protectionism policies that helped cause the great depression. The situation is worrying considering the huge power bestowed to the incumbent president.

Trump has already caused major divisions within his own party and the American public and led some to believe that his election could cause major turmoil including economic depression and war.

This has been somewhat reflected in the financial markets where we have seen the price of gold fall sharply over recent weeks while stock markets have stabilised.

In short, markets have become more orderly as Hillary Clinton’s odds of winning the election have improved. 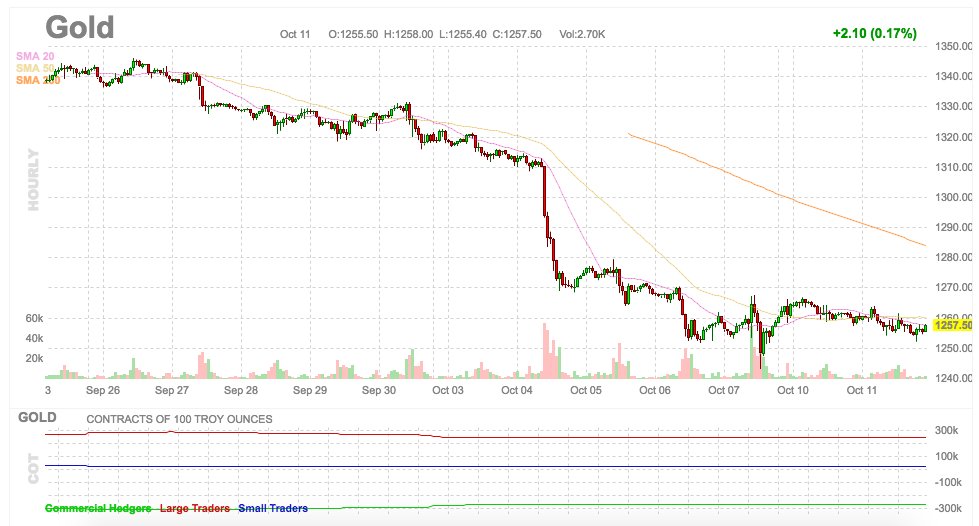 As we get nearer to the election, it will become clear just how nervous markets are. With the S&P 500 perched near all-time highs, it would not take much to see a risk:off scenario take place.

Are Markets Scared Of Trump?

The biggest risk is a Trump victory which could cause huge uncertainty and see markets experience ‘Brexit-type’ gyrations.

Any sign of Trump winning the election is likely to see such market volatility increase. Whether that volatility is long lasting is much harder to anticipate.

If Clinton wins, the markets are likely to return to good old fundamentals as driving forces, especially with issues such as the Fed rate hike, crude oil output deals, and European sovereignty clouding the picture.

With markets still at ‘lofty’ levels, there’s no assurances that the stock market will rally whoever wins the election.

Thanks for the detailed analysis. This is great. I think your comparison between a Trump win and Brexit reaction makes a lot of sense. I guess only time will tell what happens, but it does pay to do some scenario planning for the investment portfolio!

Yes, I haven’t actually looked into this too deeply yet, I think we will get some more signs from the markets as we get nearer to the election. I wouldn’t be surprised to see the betting markets move slightly more in favour of Trump before then.