Is it time to sell Apple shares?

Today’s post was going to be about trading systems but half way through writing it my nine month old MacBook Pro decided to freeze and give up completely.

Hard disk failure seems to be the cause — and for the second time in a couple of months; which gives the impression that there’s something more serious going on. A 40 minute phone call to Apple Care later and I am advised to take the computer in for fixing. In the meantime, I will have to make do with a newly purchased (and hopefully reliable) Dell Inspiron.

Given these events and considering the fact Apple shares led declines in the main indices yesterday (falling by -4.22%) it seems apt to write up a little post about Apple stock $AAPL. Should you still be buying? Or is it time to sell? 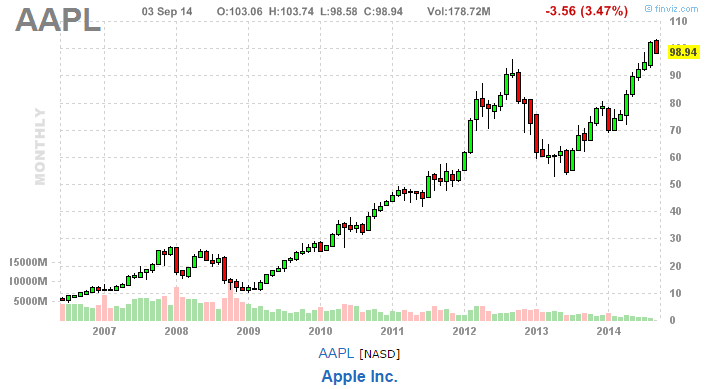 Is it time to sell Apple shares?

Earlier this year I put forward a strong case on Seeking Alpha for going long Apple and since then the stock has advanced by around 30%.

Of course since then I have had two MacBook failures so you may understand if I am no longer as endeared to Apple products as I once was. I have also experienced several iPod battery failures and some issues with the desktop models.

Nevertheless, I can’t write off the company based on my own experience so let’s take a look at some other factors.

Although I don’t pay too much attention to short term news and events, Apple shares did drop heavily yesterday and it seems there are at least a few reasons for this.

First, traders seem nervous to enter new long positions with the next iPhone unveiling scheduled for just a few days time. Second, there has been some negative publicity surrounding the security flaws of Apple products that led to the stealing of celebrity photos. And third, the unveiling of new Samsung smartphones at a trade show in Berlin.

Personally, I don’t think these events say much for the future direction of the share price but overall I do note some pressures that may indicate a slightly reduced rate of earnings. No-one knows how the next iPhone will be received and that uncertainty should keep the stock price under pressure over the next few days.

On a technical outlook, Apple shares are at all-time highs having gained 26% year-to-date. But even so, they are not overbought and the RSI daily reads at a reasonable 49.25. The monthly chart could easily see a stronger correction but that is not particularly likely. In fact, so long as broad stock indices continue to climb, chances are that Apple shares will also climb. Overall, the technical picture is bullish but traders would prefer to enter on a more significant pullback.

For me, the most important piece of the investing puzzle are the company’s financials and in this regard Apple still looks in great shape. Price to earnings is just 16 and illustrates good value, as does the forward PE at 14. Price to sales and price to book are reasonable and so is the current ratio of 1.50, which takes account of the company’s healthy balance sheet. ROE is strong (31%) and profits equally so (net profit margin of 21.6%).

Looking at these numbers, the near 2% dividend, and the trend of improving earnings included, I just can’t make any case for selling Apple shares here. In fact for me, Apple remains one of the best stocks around for long term holders.

The only thing I will say is that at these prices I am not a buyer. I could be wrong but I don’t see Apple growing earnings at the same rate we’ve seen in the past and I wouldn’t disagree with current analyst predictions of around 12% a year. That would give a conservative DCF valuation that is not far away from where we are now.

Maybe I am nit-picking, and it might never happen, but I would prefer to wait for prices to come down a bit before making an entry. As well, I would like to see the PEG ratio come down a bit as a guide to cheapness.

So despite my recent experiences with Apple products I’m just about still a fan. If shares were to drop, to $80 say, I doubt I would have much hesitation in buying.