Testing Moving Average Crossover Strategies On Stocks : Which Is Best?

The SMA and EMA have been the basis of many successful trend following strategies over the last 40 years and are still commonly used by traders today.

Trend followers then sell, or go short, when the fast moving average crosses back under the slow moving average, indicating that the trend has now changed.

Although moving average crossover strategies are most commonly associated with trend followers they can been used by mean reversion traders too. In this instance, a moving average crossover may indicate that a market has strayed too far away from its mean and is due for a rebound. A mean reversion trader will therefore trade in the opposite direction of a trend follower when a crossover takes place.

Due to the proliferation of traders who take the trend following approach, there is use in testing the mean reversion version as well.

In a recent podcast interview, one of the original Turtle Traders, Jerry Parker, suggested that trend following has become more difficult and that short-term moving averages no longer work as well as they once did.

This is something I have found myself. As financial markets become more efficient, short-term, high capacity trading systems no longer work as well.

In the rest of this article I will build a simple portfolio strategy for stocks and test different moving average lengths in order to find which crossover strategies work the best. Although the results are historical, they should provide us with some clues for trading in the future.

Setting up the test

In order to test different moving average crossover strategies I’m going to load up Amibroker and create a simple portfolio strategy that holds a maximum of 10 stocks.

Different moving average lengths will be tested to find out which crossover works best.

Tests will be run on the S&P 500 universe of stocks between 1/1/2000 and 1/1/2015 and commissions will be set at $0.01 per share. Stocks will be weighted equally and ranked according to RSI(14). The test will be long only so no short positions will be allowed.

The objective function used will be the CAR/MDD ratio which is the compounded annual return divided by the maximum system drawdown (peak to trough in equity). This will enable us to compare results and identify which crossover lengths works the best. The higher the CAR/MDD ratio, the smoother the equity curve and the better the system.

Running this test on the S&P 500 universe of stocks between 1/1/2000 and 1/1/2015 with a maximum portfolio size of 10 stocks returns the following results and equity curve: 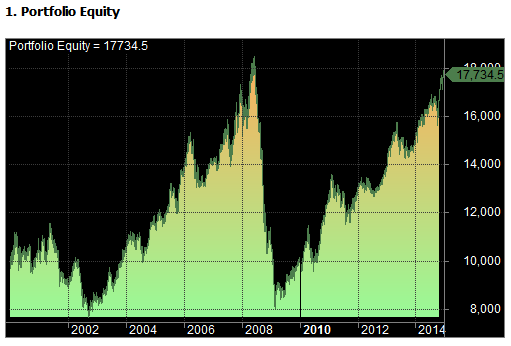 Creating an optimisation in Amibroker

We have now tested the golden cross strategy and the results were less than pleasing.

What we can do now is vary the moving average lengths to see which crossover is optimal and this is extremely easy to do with the Amibroker optimiser, using code as follows:

When we include these variables in the buy rules and run the optimiser, Amibroker is going to test every possible combination of the two variables.

Optimisation results: which crossover is the best?

After running the optimisation, Amibroker presents a list of results for each combination.

We can now click into the ‘optimize’ button again in Amibroker and choose view 3d optimisation graph and get a 3D visualisation of the results, as shown below: 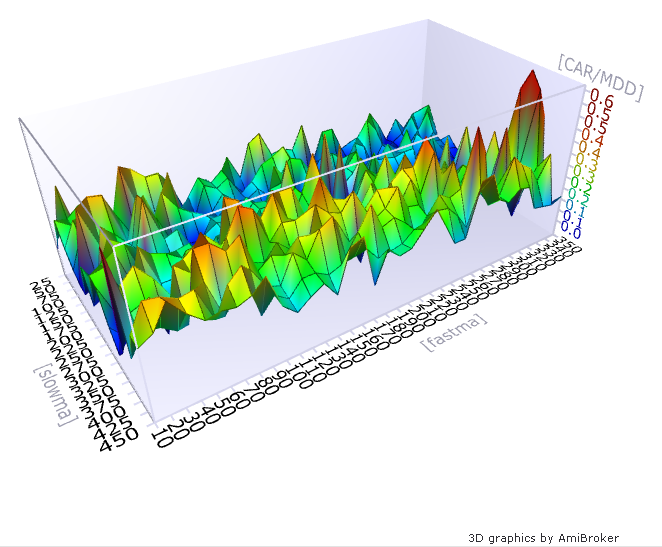 We can also export the results to Excel or to a data visualisation program like Tableau.

How to read the results

By moving across the table you can find the system result for each crossover. For example, the 50/200 day moving average crossover resulted in a CAR/MDD of 0.08 and is shaded light green.

The next table is the same but instead of showing CAR/MDD, it shows just CAR (%):

Looking at the results

Looking at these results, we can see some clear patterns have emerged.

You can also see a handful of good results (in the top left corner) where the fast moving average is longer than the slow moving average. This is the mean reversion approach in action.

Clearly, there are more avenues we could go down in order to test moving average crossover strategies.

We could test different types of MAs (such as the EMA, TEMA, WMA), different portfolio sizes, different markets and more combinations.

Overall, the results confirm our suspicion that longer term moving average crossovers are more effective when trading US stocks.