How To Pick Market Tops And Bottoms

On the whole, it’s better to avoid trying to pick market tops and bottoms. If you try and pick the tops and bottoms every single day you’re going to get frustrated very quickly and wind up losing a lot of money.

How To Pick Market Tops And Bottoms

That being said, some traders have a knack of picking the turns on longer term horizons. And some have made solid careers out of being great market timers.

I wouldn’t say that I was a great market timer myself but there are moments when you do get a strong feeling that a turn is around the corner. These are rare opportunities that normally only occur once or twice a year.

The bottom in stocks in March 2009 was a good example. Everyone had simply given up, prices were in free-fall, and there was this climactic feel to the markets. The charts were also extremely oversold. It was pretty clear at the time that the markets were near at least a short-term bottom, though few would have predicted such a strong recovery. 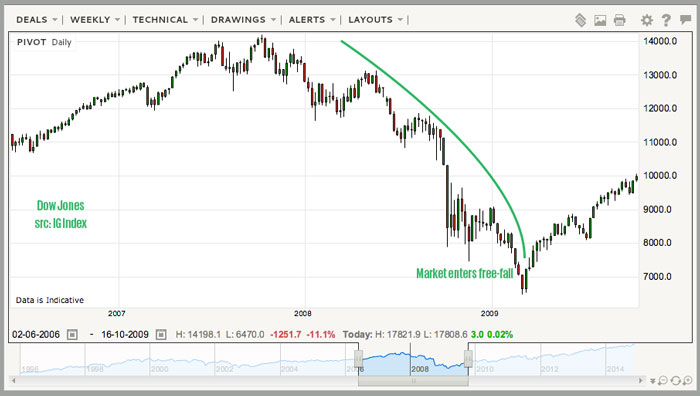 Another good example was gold in 2011. At the time, gold had been up for something like 10 years in a row and there were ads all over the television asking people to trade in their gold. However, the most obvious sign was the price chart. The metal was practically parabolic on both the weekly and monthly chart, a clear sign that investor exuberance had reached a peak. 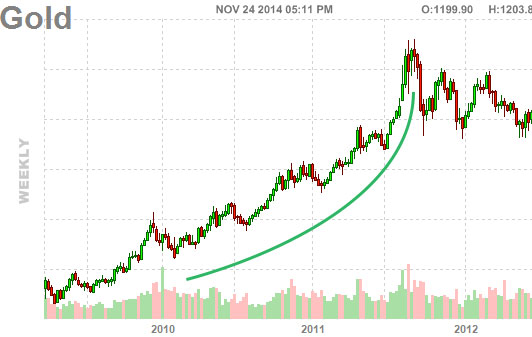 These market turns do not come around all that often so the biggest skill needed for finding market tops and bottoms is patience. Indeed, markets can scale a wall of fear or exuberance for a very long time and they can go up and up for long periods before they become parabolic.

For the big market bubbles and crashes, markets can look parabolic on a chart, where they seemingly can’t go any higher, or lower.

These moves often end up rebounding almost as sharply, as traders (who were on the right side of the trade initially) have to quickly cover their positions.

More usually though, market tops and bottoms take some time to develop and they usually have some key differences.

The difference between market tops and bottoms

It takes several years of experience and practice to realise that market tops look very different to market bottoms.

When a market reaches a peak, it is usually very overbought. The daily RSI could be over 80 and the price chart may look almost exponential, like a parabolic curve. When the correction comes it is normally very sharp and fierce.

Like a house of cards, the market can come crashing down as fear sets in and everyone tries to get out at the same time.

Conversely, market troughs can take much longer to pan out.

The house of cards can come crashing down in as little as a day but it can take many years to build it back up. The 1987 crash was a clear example of this, where stocks dropped 30% in one day and did not recover until 1990.

Generally then, market bottoms can take many weeks/ even months of consolidation and false starts. Markets rebuild slowly, and prices often hang around a lower base level for a long time, putting in a number of double or triple bottoms over several years.

This is why it’s generally not a good time to dive into a market straight after it’s had a big drop.

It usually pays to wait out the period of consolidation that follows so you don’t enter too early on a price move and get whipsawed.

Of course, there are exceptions to every rule and the most recent bull market in stocks shows the type of sharp rally that can happen when an initial short-covering has billions of dollars of easy money behind it.