10 Biggest Stock Market Bubbles And Crashes Of All Time

Throughout the early 2000s, and not too long before the global financial crisis of 2008, UK Chancellor of the Exchequer and PM in waiting, Gordon Brown, repeatedly claimed an end to the boom-and-bust cycle.

Brown was proven wrong (and catastrophically so) as financial markets descended into a spectacular downward trend.

The fact is, stock market bubbles and crashes, economic boom and busts, are a feature of the financial markets and the way modern economies operate.

Anyone with any knowledge of history will know of the numerous financial bubbles and crashes that have happened over the years and Brown really should have known better than to make such an outlandish claim.

Here are 10 of the biggest stock market bubbles and crashes in history:

It’s said that tulip bulbs became so valuable in Holland in the 17th Century that ordinary people would trade in their land and life savings to buy just one or two bulbs. Tulip bulbs could go for tens of thousands of dollars (in today’s money) and this led heavy speculation and huge sums of wealth.

However, such high prices could not be sustained and when the bubble burst, many speculators were wiped out. A mild depression ensued, meaning that even those who sold at the peak of prices did not have a great time of it over the next few years.

The South Sea Company was an international trading company from the UK with special trading rights in South America (then known as the South Seas) granted by the British government.

This was a time when the British Empire was near the height of it’s powers and vast sums of money were being made in international trade and exploration. Shares in the South Sea Company began to soar after rumours embellished the true value of the company and soon enough shares were being traded for thousands of pounds.

When the bubble popped, the South Sea Company lost nearly all of its value. British scientist Isaac Newtown and author Thomas Swift (of Gulliver’s Travels) were among those to lose a good chunk of money.

Despite the name, the Mississippi bubble actually occurred in France and took place around the same time as the South Sea Bubble.

In financial ruin from the previous civil war, France sought help from Scottish economist John Law who proposed the creation of a national bank with paper assets backed by deposits of gold and silver.

This led to a an inflationary boom which appeared to paper over the cracks of the country’s previous problems. However, the inflationary bubble popped and the national bank’s paper money plunged in value. This saw France enter a period of economic crisis even worse than before the bubble.

The railroad bubble in the UK in the 1840s was a classic case of speculative frenzy and over-exuberance.

When the railway was first invented, it was a truly revolutionary and life-changing thing, so much so that huge sums of wealth were created and the industrial revolution was allowed to take place.

However, the success of railroad companies led to the building up of thousands of kilometres of unnecessary tracks in a clear sign of over-optimism. Railroad stocks kept climbing higher and higher until prices eventually crashed and many of the same companies went out of business. 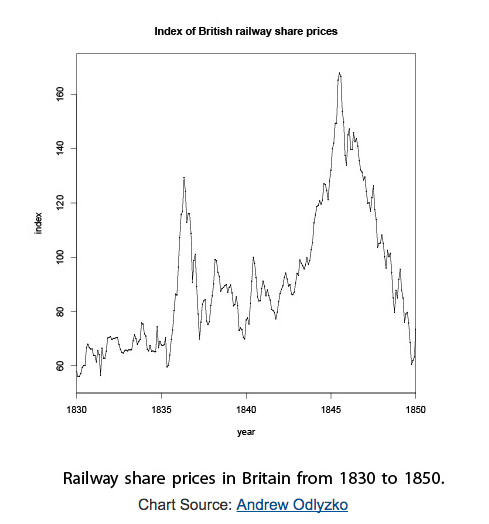 The previous period, known as the Roaring Twenties, were times of great prosperity in the US which saw the introduction of many new technologies such as radio and commercial airplanes.

When the bubble finally burst, a vicious cycle ensued which put further pressure on stock markets and saw some bankrupt stock investors take their own lives. Ultimately, the United States would go through a lasting period of economic pain as a result, now known as the Great Depression.

Black Monday is the name given to the stock market crash of Monday 19 October 1987, which is still the largest one-day crash in history.  The Dow lost 22.6% of it’s value on the day which came after a number of strong years of stock market gains during the 80s.

The exact reasons for the plunge have never been completely understood but it’s likely the drop came about from a combination of different factors including program selling, illiquidity, overvaluation, and market psychology.

During the height of the Nikkei bubble in Japan, it was thought that the land underneath Tokyo’s Imperial Palace was worth more than all of the land in California.

At the time, Japan was at the forefront of the automobile and electronics industries and had seen it’s leading stock index, the Nikkei climb to nearly 40,000.

Within a few years, the prices of stocks and real estate had burst and the Nikkei had fallen to just 15,000. The bubble set in motion a period of deflation that the country is still struggling to overcome, many years later.

Just as happened with railroads and countless other bubbles before it, the Dot-com bubble came about as investors and speculators latched on to the next big thing, or in the case, the creation of a ‘New Economy’ where traditional business requirements and cycles were a thing of the past.

Technology and Internet stocks making up the Nasdaq stock index soared to spectacular heights and even those with no proof of earnings climbed on the expectation of huge Internet-driven profits.

The Nasdaq saw an impressive rise-and-fall and many Dot-com companies that went public (such as Pets.com) never made it out.

The global financial crisis of 2008 stemmed from the collapse of house prices in the US and the fall in value of complex mortgage-backed securities which threatened the solvency of some of the world’s largest financial institutions and the financial system itself.

As a result, global stock markets imploded in what was one of the sharpest bear markets since the Great Depression.

There were many victims of the credit crisis; banks, investment houses, insurance companies, individuals, and investors.

The crisis of 2008 was severe enough for many analysts to predict several years of pain ahead. However, the ultra-loose Keynesian policies from the Federal Reserve have helped to re-ignite growth in the US and this has seen stock markets recover all of their losses from the crash.

Thanks to the Fed and other central banks around the world, the global economy is now in much better shape than most would have envisaged a few years ago and unemployment is still on a downward trend.

As we have seen, however, stock markets have a tendency to overshoot and it will not be long before we see the next stock market bubble take place. The Fed have helped to prop up the economy through aggressive money-printing but those printing presses will soon need to be turned off as inflation begins to re-emerge.

Once the Fed begin raising rates, it will become much harder for businesses to drive growth and eventually, we will see another recession.

How to spot the next crash?

How easy is it to spot the next stock market bubble or crash? Well, if you look at these examples and you also analyse the factors that led up to them it may not seem all that difficult.

In reality, the difficulty is not identifying a bubble but timing one – since markets have a tendency to stay inflated for longer periods than most would anticipate.

Nevertheless, here are some signs and similarities to look out for:

Clearly, one similarity all stock market bubbles and crashes possess is that they see huge price moves. So if a major market has rallied by a huge amount in a relatively short space of time it’s a sign that a bubble is forming.

Most bubbles have relied on some level of leverage or debt to sustain higher prices. During tulip-mania, speculators were able to buy futures contracts on bulbs without money up front, and in the credit crisis, people were able to buy real estate without any real proof of income.

It’s often said that during the Roaring Twenties even the shoe shiners were giving out stock tips. Similarly, in the Dot-com bubble, it was easy to find people trying to make a quick buck riding on the latest Internet IPO. Whenever your neighbour starts talking stock picks, or how much money they’re making in real estate, gold or whatever, it’s a sure sign of a bubble.

The same goes for television shows or the front covers of major magazines and newspapers. By the time a story makes the cover, there’s a good chance that a bubble is in action.

Did you think the next bubble will happened in 2021 or we are already in the tech bubble , EV bubble or Bitcoin bubble or students debt recession. Thank you 🙏

We’re clearly in a bubble, all the signs you mentioned which are correct to assess if we are in a bubble is driving probably the longest bull economy in US history.

Companies can borrow at very low interest rates to buy assets like homes, this is huge factor that is driving home prices through the roof. Hedge firms are buying up real estate like crazy and putting enormous pressure on home sales.

Young people out of work in droves are their putting their stimulus money into the stock market. The Fed is currently suggesting that it’s almost certain by end of year or the beginning of next year to reduce it’s bond buy, tampering, or essentially creating a ton of money to give to lending institution to lend out for things like mortgages, cars, student loans.

The stimulus is ending in September and eviction moratoriums are ending around the same time. My prediction, fall 2021 or next year will be a huge correction to the market. We’re going to see just how healthy the economy is and I predict not nearly as strong as we think.

I predict the stock market to fall dramatically as young people forced to go to work and pay rent again and will pull all the money they made out of the market out.

The housing market will come back to reality as people can be evicted again and lending will slow with higher interest rates.

I don’t think we’ll see something as bad as a 2008 or 1929, but it’s going to be very harsh when the fed has to take the band aid off the economy at the end of this year. I hope people don’t have all their cash in the stock market or took out an expensive loan on an expensive house. Those people are going to get rocked.

Thanks for your view.