Warren Buffett is one of the richest men in the world and it is not hard to argue him being the greatest investor the world has ever seen.

Sure, there are money managers who have produced greater yearly returns over the course of 10 or 20 years but none have been able to compound wealth so well for the length of time Buffett has.

However, the problem for ordinary investors is that Buffett has done so well that he is now revered in the press constantly.

Every day now, countless new articles come out with an all too familiar theme;

How To Buy Shares Like Buffett, 5 Stocks Warren Buffett Would Buy, What Would Buffett Do Now, Find Out Why Buffett’s Selling The Stock Market etc… 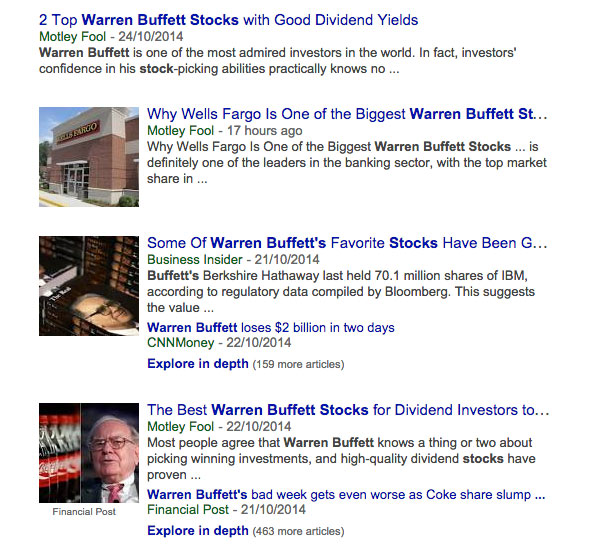 You see, the problem is that Warren Buffett is no longer just a great investor. He is a brand, an A-list celebrity, an icon, he is a ‘search engine keyword’. The Warren Buffett name sells newspapers, magazines and drives traffic to websites and blogs.

Just adding the Warren Buffett name to a book or course or magazine is usually enough to guarantee the sale of at least a few copies.

And because of that, the name Warren Buffett has become the get-out clause for any finance writer or journalist stuck for an idea on what to write next.

Don’t know what to write for your next MarketWatch article? Simple, just think up a list of stocks that Warren Buffett might like to own, or write an opinion piece that says Buffett no longer likes US stocks. Go crazy…

But of course, this over exposure to what Warren Buffett does causes some real problems and I think that this is particularly true for those who are new to the investing game.

Naturally, the first instinct of those who are uninformed about something is to seek out a person who they deem to be an expert in the field. And in Warren Buffett, that is exactly what they have. And it is therefore beginners who are most likely to seek out this kind of article and absorb it for what it is.

The problem is that these articles are usually lacking in any real factual accuracy or detail. The ‘five stocks that Warren Buffett might like‘ rarely indicates the five stocks that Buffett actually does buy.

And articles pertaining to just what is in Warren Buffett’s portfolio are often out-of-date and missing the real facts (such as that Warren Buffett may have bought into the said share at a much lower price).

In short, it is lazy journalism.

But that is not the only reason why such articles are bad.

In fact, even if these articles were accurate, up-to-date and privy to truthful information, I suggest that it would still be unwise to follow them.

Because investors should never follow tips. Yes, even if that tip comes from the greatest investor of our time!

The first problem with following Warren Buffett is the same problem that comes from following any investor or money manager. If you take a tip from another investor you come up against several roadblocks.

Unless you are in direct contact with the man himself you have no way of knowing his exact entry price. You don’t know whether he got any preferential treatment in the boardroom, resulting in a more favourable entry level. (And that is sometimes the case with some of Buffett’s deals).

In addition, you won’t know his exit price or the price that might move him to reduce his holdings.

Similarly, you can’t be sure of his true motives for buying the stock in the first place.

But another reason why you shouldn’t follow Buffett is that over the past 10-15 years, his returns have not been all that spectacular.

Whether it’s because markets have simply not been very good (partly true), or that his decades-old strategy is no longer effective (somewhat unlikely), the truth is that Buffett has returned just 8.9% a year since 1999. 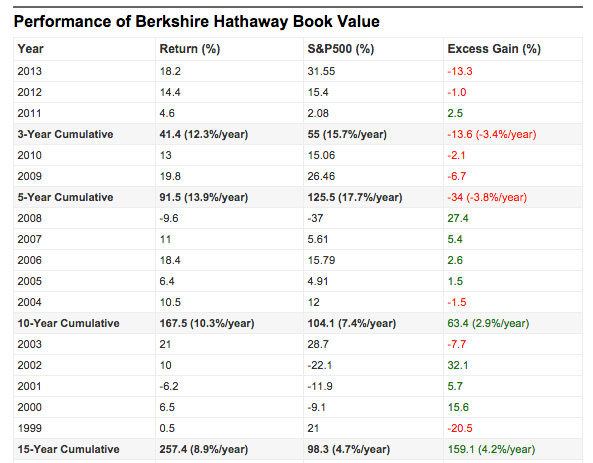 I’d hazard a guess that most traders and investors are looking for better returns than that, so following the picks of Warren Buffett is likely to prove a frustrating affair for most.

And don’t forget that frustration leads to poor decisions. It leads to jumping off the train and abandoning your strategy and ultimately leads to the poor house.

And there is simply no need to invest like Warren Buffett.

Due to the sheer size of Buffett’s wealth, he is naturally limited to only investing in the most liquid companies. There is no need to limit to yourself to the stocks that Buffett chooses. And depending on your age and risk profile, you’ll likely find more success by looking for smaller companies than Buffett is restricted to.

Indeed, Buffett said this himself back in 1999:

“If I was running $1 million today, or $10 million for that matter, I’d be fully invested. Anyone who says that size does not hurt investment performance is selling. The highest rates of return I’ve ever achieved were in the 1950s. I killed the Dow. You ought to see the numbers. But I was investing peanuts then. It’s a huge structural advantage not to have a lot of money. I think I could make you 50% a year on $1 million. No, I know I could. I guarantee that.”

So you can see that it is unwise to follow Warren Buffett into battle considering the ‘structural disadvantages’ that he faces.

What should you do then?

Well as I have said before, I feel every investor needs to find a strategy that fits their personality. One that they feel comfortable with and fits their risk profile.

They should never blindly follow another money manager, no matter how successful they have been in the past.

While there is plenty to learn from Warren Buffett and investors would be wise to study his strategies and principles, there is no reason to follow everything he does and every stock he buys.

And similarly, there is every reason to steer clear of the many articles and books that seem to be written about him on a daily basis.