Should You Trade Gaps In Forex?

The focus of this article is a new study by Caporale and Plastun. They suggest that there’s an edge to be had in forex markets by trading gaps. However, they could not find an edge in other assets.

Following are some of the findings from the research paper and then some concerns we have about their results:

Gaps don’t appear to work for stocks or commodities

While gaps appear in all markets it appears that they are not as profitable in futures or commodities as they are in forex. The authors found no statistically significant relationship that shows you can trade a gap profitably in equities or commodity futures.

There’s an edge for forex traders

The study suggests that there is an edge to be had in forex markets by trading market gaps. In their paper they looked at both the GBPUSD and the EURUSD and both showed a profit by trading gaps over a 16 year period.

Not all gaps are created equal. Smaller gaps are going to occur far more often. However, it seems that you need to have a decent sized gap to turn a profit. In the study, the authors found that in GBPUSD a gap size of 0.1% worked best while for the EURUSD, 0.05% was more effective.

Get short a positive gap

The study shows that the best strategy in GBPUSD and EURUSD is to sell a positive gap and hold the trade until the end of the day before closing it.

If you look to short a positive gap in GBPUSD or EURUSD, then you can find yourself a winning trade more than 60% of the time according to the authors.

The evidence suggests that by shorting positive gaps you have identified a market anomaly and potentially an opportunity for increased returns. This is in direct opposition to the efficient market hypothesis.

While the study by Caporale and Plastun does provide some interesting insights, we feel there are a number of concerns that should be taken into account before using this information to trade. These include:

Limited number of markets were tested

The first issue to be aware of is that the authors have only investigated nine markets;

It is therefore not possible to make any generalisation that gap trading is profitable on forex and not stocks or commodities or vice versa. There are many more markets that can be investigated.

No timeline of results shown

The authors show that shorting positive gaps in GBPUSD and EURUSD was profitable between 2000-2015, however, they have provided no accurate timeline of results or equity curve.

It is good to know a strategy is profitable but if a big chunk of those profits occurred in just one or two months then the strategy may not be worth trading.

In fact, when I tested one of the short positive gaps strategy on GBPUSD I indeed found that a chunk of the profits came in the 2008 crisis as shown by the equity curve below:

A third problem with the study is that a number of the results suffer from small sample size. When testing a 0.2% gap in EURUSD for example, there were only 29 occurrences in 15 years.

As well, the paper does not include any out of sample analysis in their findings.

Possibly the biggest issue to be aware of is that the results are dependent on the data used for the analysis and this is subject to potential disparities.

When I tested the rules on my own database of historical data for futures and forex I found significant differences in both frequency of signals and profit.

For example the authors found 29 occurrences of a 0.2% gap in EURUSD whereas I found 56.

In fact, discrepancies are to be expected in forex because the forex markets are not centralised and the data always differs from broker to broker. As well, there could be differences related to time zones and the splicing of contracts in futures.

Given some of the discrepancies in the results I decided to do some testing of my own. Following is a selection of my results: 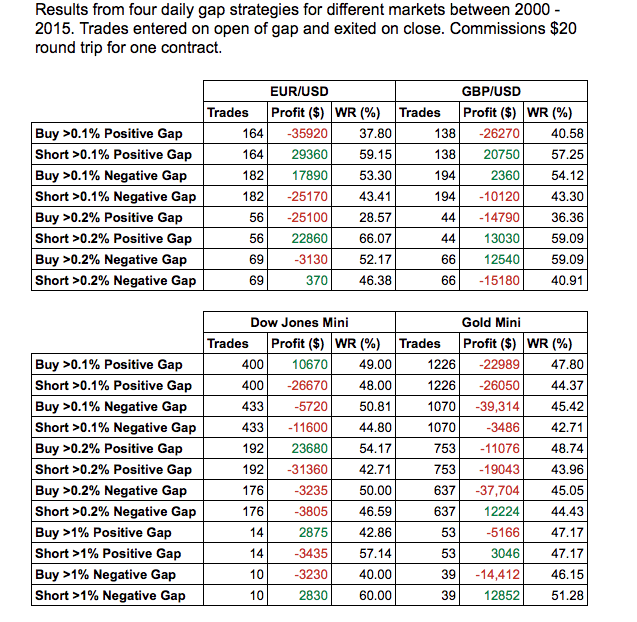 It is a bit disconcerting to have such different numbers compared to the research paper.

However, shorting positive gaps was found to be profitable in both GBPUSD and EURUSD which actually does support the findings in the study. The win rate was also similar.

Buying positive gaps was also seen to be the most profitable strategy for the Dow Jones Mini.

Overall, this study presents some interesting information but it also brings many concerns and underlines the importance of checking results and doing your own research.

In the case of forex, data cannot always be relied upon due to the decentralised nature of the market. The best solution is to only analyse data from the broker you use to trade. This is your best chance to make sure your analysis will match your trading.

Overall, shorting positive gaps (mean reversion) does seem to be the better choice when trading GBPUSD or EURUSD.