I had a few spare moments so I thought I would play around with the Portfolio123 simulator and see if I could come up with any new trading ideas.

The first thing that came to mind was to look at ideas for small-caps, since smaller companies outperform larger ones over time.

So I decided on a portfolio investing system that buys small cap stocks meeting a certain set of criteria. 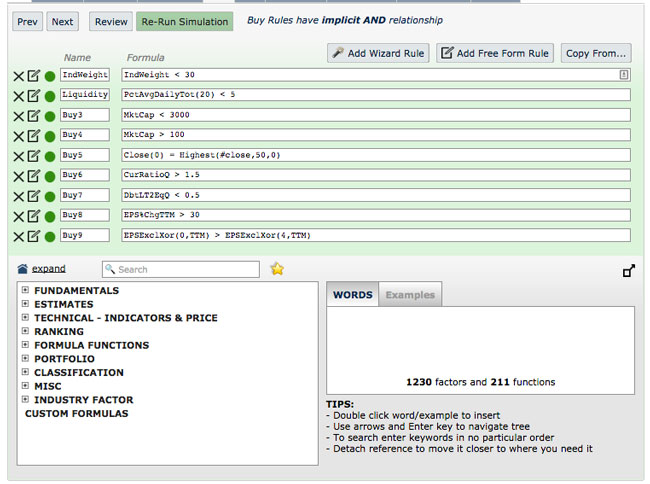 I then decided to look at debt levels since small companies with low levels of debt will surely be attractive investments. I therefore set the current ratio to be over 1.50 and I set total debt to total equity to be under 0.5.

Next, I wanted stocks that were already moving up so I set the system to look for stocks making new 50 day highs.

Finally, I altered the ranking so that the system would prefer stocks with smaller market caps.

I kept the sell rules simple and told the simulator to sell a stock if it closes lower than it’s 25 day low (on the rebalance date).

If a stock meets the sell rule on the rebalance date, it is sold and drops off the portfolio.

Risk was set at 5% (no margin) so the portfolio could hold a maximum of 20 stocks at any one time.

Here are the exact rules from the Portfolio123 interface: 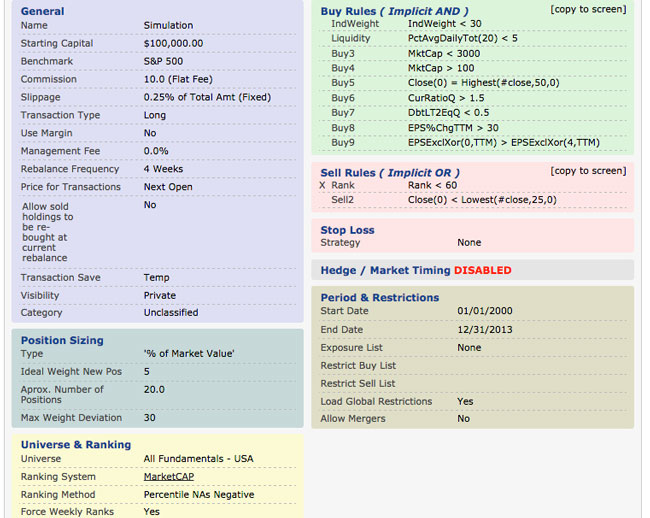 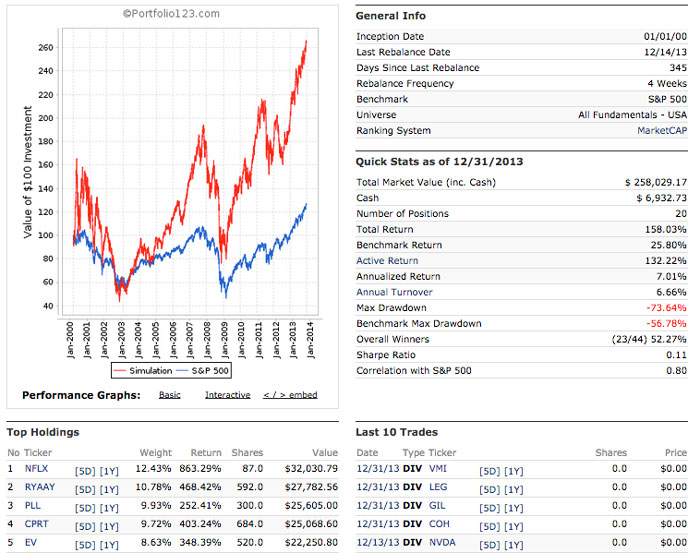 The annual return was significantly better than the benchmark (S&P 500 Index) over the period, however, the drawdown was much larger.

As you can see from the bottom of the image, the top holding by the end of the experiment was Netflix $NFLX.

Should you trade this system?

It’s fair to say that most traders would not be able to trade this system. The maximum drawdown is extraordinarily high and the subsequent returns are not enough to compensate for this risk.

When compared to returns of previous systems such as the 11-rule system or the Trend Following With A Twist system, this (basic) small-cap strategy does not look very good at all.

What can we learn?

Of course, the chances are that we can improve on this system. We could introduce market timing filters, better diversification and alter the parameters.

However, the results suggest we might be better scrapping it completely and building a system with better rules that align more closely to a specific investment philosophy.

In the interest of science

It’s important to note that this system was not optimised, I just ran a few things off the top of my head.  Although I did test a couple of different ranking strategies.

I thought I would write it up in order to keep a record and also in the interest of selection bias.

If we only ever post up high returning strategies, it can give a distorted view of what trading strategies work and what don’t.

This not only happens in trading system development but in other fields, such as medical research.

When journals only publish successful scientific studies they distort the true picture and ignore the many hundreds of other similar studies before it that may have been unsuccessful.