A Shocking Response From Financial Markets

Yesterday’s US election result came as a shock to many people and I’m sure you will have strong feelings about it too.

Many observers took to social media to report their surprise and despair at the result.

Others, such as Michael Moore and Shane Parrish, were more in tune with proceedings.

If you’re surprised by this it’s because you’ve lost touch with how a lot of people are feeling and living.

On a personal level, I was only mildly surprised by the result having learnt my lesson from Brexit earlier in the year.

One thing is for sure, it’s clear that polls and online betting markets cannot be relied upon to give reliable predictions all of the time.

Even more surprising, however, has been the reaction from financial markets to all of this.

S&P 500 futures hit limit down as the result started to become clear but then reversed all of those losses as the day wore on.

The S&P 500 index is now just 1% away from all-time highs and I don’t think anyone would have predicted such a gyration at the start of the day. 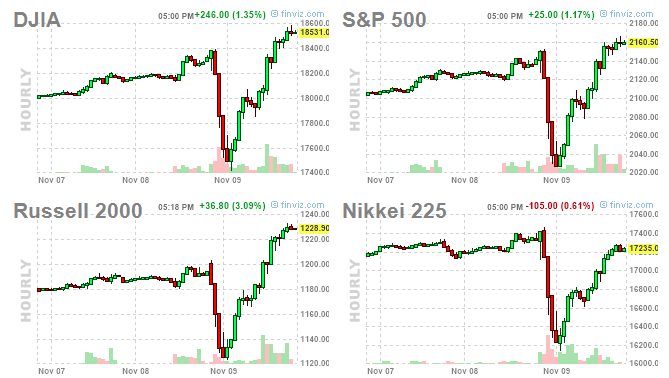 Did Trump’s speech help the reversal?

A lot is being said of Trump’s victory speech and how he mentioned the need for binding ‘wounds of division’.

It’s possible that the speech helped cause some relief among investors which helped the market stage a sharp rebound.

However, it’s equally likely that the rebound was helped by algorithmic funds and ‘buy the dip’ traders.

Buy the dip has been a popular strategy for many traders this year and so long as it keeps working they will keep on doing it.

Rate hike expectations also got pushed out by the election result which is another factor that helped stocks rally.

Going forward, investors are going to need more than a victory speech to soften their concerns about the economy and other global issues.

Stock markets do not like uncertainty and since no-one knows what a Trump Presidency will be like, we should expect there to be more volatility ahead.

No doubt, this will create plenty of trading opportunities as well and I don’t think they will be solely limited to the downside.

The one cushion in all of this may well come from the Federal Reserve in the form of weaker monetary policy and dovish rhetoric.

One opportunity that did present itself yesterday was in coal.

Coal stocks have been beaten up the past couple of years but Trump has said that he will do what he can to revive the industry.

This caused some coal stocks to rally as much as 20%.

Fortunately (and unlike many other markets) the move did not all occur overnight and it was possible to pick up many coal stocks on the open for a good price. 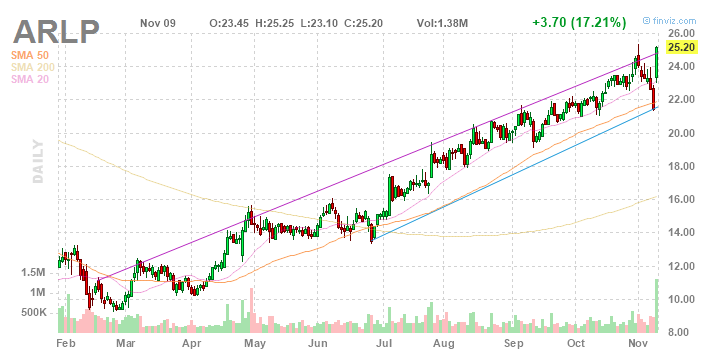 I am not a fan of coal particularly but I did buy some ARLP for a short-term trade and made a decent profit with it.

I do not make too many discretionary trades but it’s good to know such opportunities do still exist and that they’re not always immediately priced into the market.

It’s possible that the momentum in coal stocks could continue for some time given the state the industry is in.

Looking to other areas, some analysts suggest that Russian stocks are also a good play now.

Either way, it’s going to be an interesting few months and I don’t think there has ever been a more important time to look after and protect one’s own business interests and investments.

Thanks for your analysis Joe. I agree that Brexit was a big warning for this. Luckily my trading system is based off end-of-day prices so I managed to sit through the volatility without deviating from the trading plan. I am curious to see how markets shake out over the next few days. The action in TLT was pretty deleterious as well.

Hi Jay! I’m glad that you managed to sit out the volatility. That is one of the advantages of end-of-day trading and systems trading. Price action over the last few days has been interesting that’s for sure. Clearly a lot of divergence and re-positioning going on.
Cheers