Testing The RSI 2 Trading Strategy On US Stocks

In this article I look at a popular method for trading stocks and futures which utilises the RSI 2 indicator. This is a mean reversion technique for finding overbought and oversold securities.

What is the RSI indicator?

The RSI (relative strength index) is an overbought/oversold momentum oscillator first developed by J. Welles Wilder in 1978. It’s a very popular indicator measuring relative strength in a security and is most often used on a 14-day timeframe, with values ranging from 0 to 100. 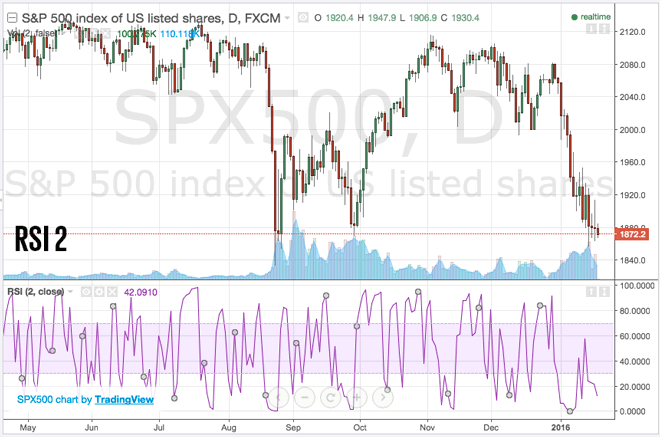 However, I tested the RSI 14 indicator on a number of different stocks and I found that these rules have not been all that successful over the last few years.

In fact, I found that doing the exact opposite (buying overbought stocks and selling oversold stocks) results in higher returns as it allows the capture of longer term upward trends. You can read the full article testing the RSI 14 here.

Since RSI 14 is not so conducive to short-term mean reversion type trades, the rest of this article will look at testing the indicator on a two-day timeframe instead. Whereas, the RSI 14 can be implemented in a trend following system, RSI 2 is a lot more volatile and more suited to shorter term trading.

I believe the RSI 2 trading strategy was first popularised by Larry Connors and Cesar Alvarez in the book Short-Term Trading Strategies That Work, published in November 2008.

Furthermore, Connors and Alvarez found that the lower the RSI 2, the greater the subsequent performance.

The book then goes on to list some specific trading strategies to take advantage of these findings. These strategies will now be tested on more up-to-date data with the back-testing simulator, Amibroker.

The first strategy mentioned in the book is on the S&P 500 Index. It has the following rules:

In other words, we want to buy the S&P 500 when it is oversold but still above it’s 200-day moving average. This strategy is run between 1995 and 2008 and is shown in the book to produce the following returns:

I tested this strategy for myself using Amibroker and historical data from Norgate between 1/1/1995 and 1/1/2008 (without any transaction costs) and I achieved the following results:

As you can see, the results are almost identical. Following is the table of results by month and year: 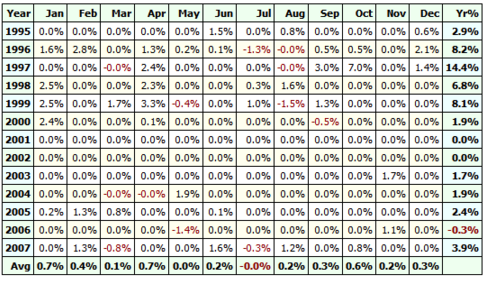 Since the test results look good so far I moved the data set forward and tested the strategy between 1/1/2008 and 1/1/2016. The results are shown below:

As you can see, although the strategy has still been profitable performance has declined somewhat and this is clearly seen by the CAR/MDD ratio.

The results table below shows how the system did poorly in 2011, 2013 and 2014. However, performance did come back strongly in 2015. As a result, it is hard to say whether the strategy is broken or not.

In the second test, Connors comes up with a strategy which uses a cumulative RSI. This strategy is tested on the SPY ETF and has the following rules:

Running this system on SPY between mid-January 1993 and 1/1/2008 is shown in the book to produce the following results:

I ran the same system in Amibroker on the SPY ETF and got the following results:

Clearly my results are quite a bit different. I’m not sure why that is. Maybe I am not testing the right market. Maybe my rules are not the same. It’s hard to tell given the information in the book.

Nevertheless, let’s run the strategy and see how its performed in more recent years. Thus, running the same strategy on SPY between 1/1/2008 and 1/1/2016 I achieved the following results:

Once again, you san see that the strategy has not performed so well in recent years. Although the percentage of winners has only declined slightly, the drawdown has more than doubled. If we look at the profit table, we can see that the system has actually done quite well every year except in 2011 where it lost 11.5%.

According to Connors, stocks have added risk versus indices because they can go to zero (whereas indices can’t). Connors therefore suggests it’s important to use much lower cumulative RSI readings on individual stocks.

In Stock Trading Strategies That Work, Connors looks at all stocks with cumulative RSI readings below 10 with an average daily volume of more than 250,000 shares and a stock price above $5.

He concludes that there were 77,068 signals between 1995 and 2008, “of which 69% of trades were profitable exiting above a 2-period RSI of 65” and that  “the average gain on these stocks was nearly four times greater than the gains for all stocks with the same holding period.”

In order to test this final approach I came up with the following portfolio strategy rules:

I ran the strategy on all stocks in the S&P 1500 universe between the dates 1/1/1995 and 1/1/2016. This time I included commissions of $0.01 per share and all trades were made on the close. The results and equity curve from this strategy are shown below: 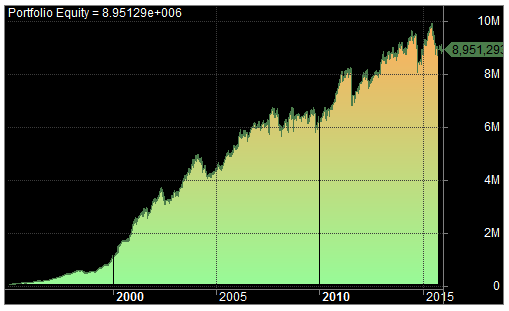 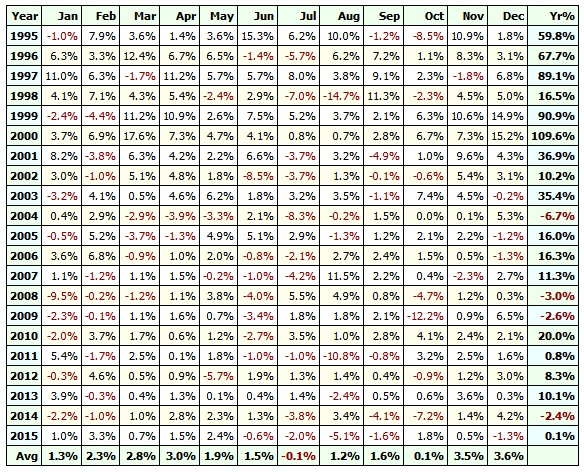 As you can see from these results, the strategy has put in a very good performance over the last 20 years, turning a hypothetical starting capital of $100,000 into almost $9 million with an overall annualised return of 23.86%.

So, the RSI 2 trading strategy really has been a great way to get on board some oversold stocks and make some profitable mean reversion trades!

However, although these results do look good on paper it’s also important to be aware of some additional considerations.

The most glaring consideration is shown from looking at the yearly profit table (above) and this shows that the strongest performance actually came at the beginning of the test period. For example, on the S&P 1500 universe, the strategy made over 80% in 1997, 1999 and 2000. In recent years the strategy has performed nowhere near as well.

This is also consistent when running the strategy on the S&P 500 and S&P 100 universe as you can see below:

It’s worth noting that the strategy still seems to be profitable with very few down years. Maybe an edge still exists but performance does seem to have tailed off.

It’s also important to consider that this strategy entails trading precisely on the close. Since you won’t know the real RSI closing value until the day is over, you will likely need some method of pre-calculating the trade price which will give you the correct closing signal. This may prove difficult.

Also, the short-term nature of the system means that slippage estimates may vary.

The performance of the RSI 2 indicator strategy seems to have lost some of its edge in recent years. This may be because markets have become more efficient, because the strategy has become more widely known, or a combination of the two.

The strategy is also difficult to implement especially when dealing with a large universe of stocks.

Having said that, the RSI 2 trading strategy still appears to be profitable and there have been no down years yet recorded on the S&P 500 universe.

Overall, the RSI 2 indicator still shows some promise for development and could be used with other rules and on other markets (such as on the VIX or fundamental data sources).

The idea of a cumulative indicator is also one that could be transferred to other indicators/strategies. So long as you can accurately forecast the closing RSI values, it may still be possible to make money from this strategy, or from a variation of it.

Want the Amibroker code for this strategy? Just click the button on your left to visit the download page.

Interesting results and most definitely food for thought. I could see this might be good overlaid on the Vix or even on a shorter timeframe.

Agreed, might be interesting to see how it goes on a 30-minute or 1-hour chart

FIND STOCKS THAT HAVE A 200 DAY MA THAT HAVE A LOW TO HIGH RISE IN THE 200 DAY MOVING AVERAGE ANGLE OF 14 – 40% RISE ANGLE IN THE MA, THESE STOCKS ARE MORE RESISTANT TO SEVERE DOWN SWINGS! THESE STOCKS LOWER YOUR RISK, FOLLOW CONNORS RSI2 RULES TO BUY STOCKS ABOVE THE 200 DAY MA THAT NOW MEET THE 200 DAY MA ANGLE, BUT THEN LOOK FOR A PRICE DROP BELOW THE 5 DAY MA OF THE STOCK AND WHEN THEY DROP BELOW THE RSI2 LEVEL OF 10. THEN BUY A LONG CALL ON THEM 1 MONTH OUT AND IN A DAY OR SO THE STOCK SHOULD ONCE AGAIN RISE ABOVE THE 5 DAY MA. EXIT YOUR CALL OPTION WHEN THE STOCK RISES GENERALLY $2 OR MORE. BUY THE CALL OPTION AT OR NEAR THE CURRENT STOCK PRICE, THIS SEEMS TO WORK PRETTY GOOD. I DO NOT GIVE ANY GUARANTY TO ANYONE BUT PAPER TRADE THIS AND SEE IF IT WORKS FOR YOU! YOU NEED TO DETERMINE IF YOU WANT TO USE A STOP LOSS ON YOUR TRADE AND HOW LOW TO SET IT,

Interesting result for the 100 stocks. Do you need this statement:

Also, do you need this one?

Hi Alonso
You don’t need SetPositionSize( 1, spsShares ) in this example but I have left it is because it is part of my usual template.
PositionScore is the ranking method so if there is more than one signal we will choose the stock with the lowest RSI 2.
Thanks
Joe

better than normal 14 day RSI but still quite raw…..needs much more fine tuning

Perhaps. How do you suggest to fine tune it?

The strategy is good over a time as we can see on Portfolio Equity graph. The table shows the return on increased capital, not the initial, this is why it is lower and lower. If we use for example PositionSize = -20; in Amibroker, we will see yearly results without the influence on capital level.

Yes, that is a good point. I’ve been meaning to update this article.

Do you even code on specific strategy requests?

How do I get in touch with you ? Definetely cant be discussed here

Is the stock universe complete or is there survivorship bias in the results?

Can’t remember now to be honest but it probably did include delisted stocks. All my tests nowadays do include these companies to eliminate survivor bias.

What is the rule to exit if the position goes against yo or never exits above 65 RSI??

In order to test this final approach I came up with the following portfolio strategy rules:
Stock has 100 day average volume above 250,000 shares
Stock trades above $5
Stock is above its 200-day MA
Buy if the cumulative RSI 2 is below 10
Exit when the 2-period RSI closes above 65
Maximum portfolio size of 10 stocks at one time
Equity is split equally between each position
Duplicate signals are ranked by RSI 2; weakest preferred

Is there a suggested or posted exit rule if the position does not close above 65……or is the exit rule to wait until that happens??

The strategies I have seen wait for the RSI to close back above the level. That’s usually the only sell rule. Occasionally you can get a market that takes a long time to bounce back. A time based exit eg. 10 days isn’t too bad an idea.

You seem to ignore that Connors did this testing on a fixed set of ETF’s.
Stocks were not involved in the Connors testing. As you can see your testing on the SPY matched his results exactly.

I have tested on ETFs various strategies by Connors. Some of them are quite good such as RSI4.