If you want to be successful at investing or trading you need to find your own way. I don’t see much point subscribing to any of these stock picking services or ‘Guru’ picks.

(Unless of course they are used to educate yourself as to how to find good trades.)

That being said, one of my favourite investors is Jim Rogers and it’s always good to hear him talk.

If you don’t know Jim I wrote a bit of a profile on him a while back. Suffice to say, Jim is a legend on Wall Street and not just for setting up the Quantum Fund with George Soros.

The video below comes from one of my favourite online podcasts, London Real, and is about an hour long if you fast forward through some of the advertising at the beginning.

Jim is always happy to talk about where he is invested and it’s good to hear his thoughts on markets.

As a longer term investor, Jim’s views on markets change very slowly. He has been bullish on commodities (particularly agriculture) for years now and he is likely to be bullish for a long time yet.

He sees markets moving in cycles and believes that most cycles take 20, 30 years to play out.

He’s bullish on Asia, particularly China but also recommends Singapore and Japan in the video. He also recommends North Korea and would put all of his money into the country if he was allowed (which he isn’t).

Jim has been bullish on China for more than 30 years and continues to be positive on the country. He picks his moments though, and after some time on the sidelines, he’s recently started to buy up a few more Chinese stocks.

Jim says that the way he is playing China is to follow the government. The Chinese government are spending lots of money this year ($2.45 trillion to be precise) and the best way to profit is to follow where the money’s going.

According to Rogers, anyone can see where the money’s going so it’s just a case of finding strong companies that may benefit and putting some money in. Railroads, water, defence and tourism. These are all areas that will see big government spending over the next couple of years as China seeks to improve infrastructure, tackle the nation’s water problem and beef up it’s national security. 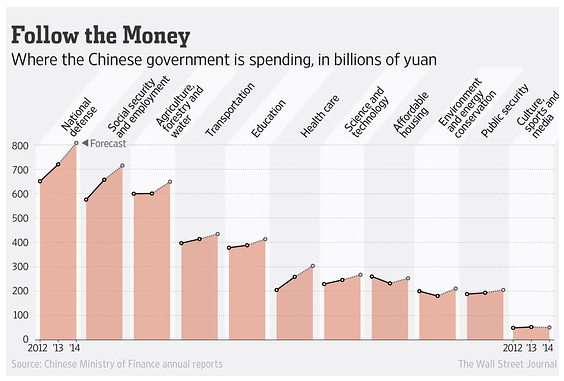 So with that information in mind, how can investors benefit? What about these ideas?

Jiangxi Copper Co. could do well as China rolls out national power grids mostly made from copper.

China Water Industry Group Ltd. may be the answer to the nation’s dramatic water problems.

Can you think of any Chinese stocks that could benefit from more government spending? Please comment below.