– Summary of Jim Rogers current investments based on public appearances

Jim Rogers the investor is famous for setting up the Quantum Fund in partnership with George Soros, one of the most successful hedge funds of all time. The fund returned around 4200% over 10 years while the S&P returned just 47%. After beginning his career on Wall Street with just $600 in his back pocket, Jim was able to retire by the age of 37. Since then, he has continued to trade successfully, he has written several books and travelled around the world on several occasions. 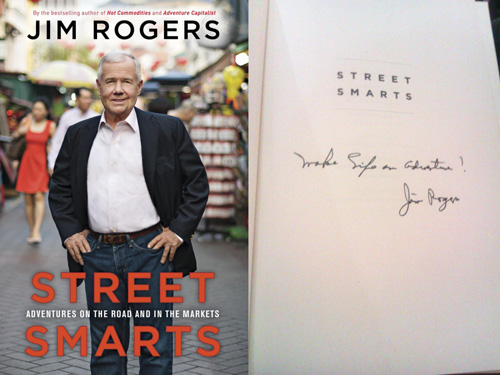 I first heard about Jim Rogers when I was working as a day trader in London and learning about the markets for the first time. I would read as many trading books as I could get my hands on and came across Jim profiled in the classic Market Wizards

book by Jack Schwager. The interview in Market Wizards was enlightening and even though my trading methods today are not that similar to Jim’s I still regard him as one of my all-time favourite traders.

Of course, Jim loves to say that he is terrible at short-term trading but he has to be one of the best investors around.

Many people think of Jim as only a commodities trader and he is the creator of the Rogers International Commodity Index. However, I don’t think it’s very true at all. Jim invests where opportunities lie and it is simply true that commodities have been a great market to be involved in over the last few decades.

In his own words

One of the things Jim Rogers likes to say is that he is terrible at market timing. By this, he means that he is usually right about things but often far too early. As an example, he predicted the global financial crisis in 2008 but he had become aware of the bubble at least two or three years earlier. In more recent times, Rogers is known to have attempted to short US treasury bonds on a number of occasions. It’s because of this, that Jim has learnt to wait; often one, two, even three years from having an idea to putting on a position.

The other thing Jim is famous for saying is that he ‘just waits until there is money lying in the corner before going over there and picking it up’. He therefore likes to take contrarian positions and will often only buy something when it is ‘severely depressed’. Doing so means that the potential for losses on any trade are ordinarily limited. Above all though, Rogers is known for his rigorous analytical work and fundamental research. Leaving no stone unturned, Jim is fascinated about the world, it’s history, and will find investment opportunities wherever they lie.

Obviously, it is not possible to see what all of Rogers’ holdings are but since Rogers takes long term positions based on solid fundamentals, he can often hold trades for many years, and therefore his views on markets usually only change very slowly. We can therefore know a little about his ideas based on his comments and public appearances.

As of March 2014, it’s clear that Jim regards the current bull market in US stocks as largely artificial, spurred on by the huge injections of liquidity from the Federal Reserve. He continues to see the potential for significant turmoil in coming years, as debt spirals out of control and the Federal Reserve have to cut off monetary stimulus. That isn’t to say he is short however, in fact Rogers believes shorting stocks in such a scenario is extremely dangerous.

Instead, Rogers favours stocks in foreign locations. He regards Japanese stocks as a potential area for profit, particularly as the Japanese stock market is still 70% below it’s all time high. As well, he regards current loose monetary policy from the Bank of Japan as conducive to stock market performance and is known to have invested in at least one Japanese blue chip.

As well as Japan, Rogers is quoted as being bullish on Russia, North Korea, Myanmar and China. A recent story stated Rogers as looking for Chinese stocks that were investing in North Korea; a country on the brink of turnaround in Rogers’ view. On the whole though, he prefers to hold his Chinese investments rather than buy new ones at the present time.

He is also stated to be bullish on airline stocks around the globe.

Jim has been bullish on commodities for many years and believes the super-cycle has several years left to run. He is particularly bullish on agricultural commodities such as sugar, which he sees as still being depressed on a long term time frame. He is also bullish on precious metals and sees gold going much higher over the next decade. However, Rogers is likely long from much lower prices and is not necessarily a buyer at current prices.

Rogers is strongly bearish on US treasuries, believing them to be in a bubble and he has already tried to short them on several occasions without success. He believes it is only matter of time before bonds collapse.

Rogers is quoted as saying he is long the US dollar, owing to the fact he expects problems in financial markets over the next few years. However, he does not particularly favour any currencies strongly, apart from perhaps the Chinese Remnimbi.

Rogers recently stated that he believes there exist many bubbles in the world; US treasuries, US tertiary education, Chinese & Hong Kong real estate and European football clubs are a few.

“Bottoms in the investment world don’t end with four-year lows; they end with 10- or 15-year lows.”
“Historically, there has been a bull market in commodities every 20 or 30 years.”
“Do not buy the hype from Wall St. and the press that stocks always go up. There are long periods when stocks do nothing and other investments are better.”
“The most sensible skill that I can give to somebody born in 2003 is a perfect command of Mandarin.”
“The price of a commodity will never go to zero. When you invest in commodities futures, you’re not buying a piece of paper that says you own an intangible piece of company that can go bankrupt.”
“If you can find ways to invest in Myanmar you will be very, very rich over the next 20, 30, 40 years.”
“The United States is the larger debtor nation in the history of the world.”

As I mentioned above, I first heard of Rogers through the Market Wizards book but Jim has written several books himself. For me, his finest is Adventure Capitalist: The Ultimate Road Trip

. Not because it contains the most material about investing but because it mixes investing with an incredible trip around the world. Jim travelled through 116 countries in a custom built yellow Mercedes breaking a number of Guinness world records in the process. For me, it is just a fascinating read.

Having said that, Jim’s most recent book, Street Smarts: Adventures on the Road and in the Markets

is considered by some to be his best. I picked up a signed copy in Singapore and read it pretty much in one sitting (on the plane home to London) so I can testify that it is also a good one.

As well as Street Smarts and Adventure Capitalist, Rogers has penned Hot Commodities: How Anyone Can Invest Profitably in the World’s Best Market

which is more educational than the others, Investment Biker: Around the World with Jim Rogers

detailing another fascinating journey around the world, A Bull in China: Investing Profitably in the World’s Greatest Market

and also A Gift to My Children

, in which Rogers gives investment lessons to be passed on to his own daughters.

Jim is also a regular public speaker and frequently appears on finance channels such as CNBC, Bloomberg and the rest. Here are a couple of videos featuring Jim:

Jim Rogers studied at Oxford University, England, for a time and was the University’s cox for the famous Oxford and Cambridge boat race in 1966.

I hope you enjoyed this Jim Rogers investor profile. For more tips and tricks and to read about my other favourite investors, be sure to check out my new book which is discounted and on Amazon for a limited time: