Is Now A Bad Time To Invest In Stocks?

I recently came across the following question on the website Quora so I thought I would add some thoughts.

This is a topic that is currently dominating the markets right now. Nearly everyone is concerned that the market is well overdue for a correction so it feels important to address this issue:

As you can tell, the questioner made the ‘mistake’ of selling his investments too early and now, after seeing the market head to new highs, he regrets making that decision.

Obviously, there are a number of mental biases at work here.

No doubt that the questioner was feeling the fear of losses when he decided to step out of the market, a concept known as loss aversion.

Now that the market has moved to new highs, there is an element of hindsight bias. The lingering thought that he should not have sold so early.

However, the biggest bias taking place here is FOMO, the Fear Of Missing Out.

The individual even alludes to this himself but cannot differentiate as to whether the fear is irrational or rational.

After this question was asked, the usual responses flooded in about how you can’t and shouldn’t try to time the market.

This is now a widely held belief. You can’t time the market. The best you can do is to stay invested and ride out the losses and take the gains.

This might be true, but does it mean you should pile into the market when it’s at record highs?

In my view the answer is a clear NO.

Even if you can’t ‘time’ the market necessarily, it would be foolish to put all your money into the market after such an extended rally.

So let’s look at some facts.

The Stock Market Will Fall

As I mentioned in a previous article, the S&P 500 has now gone over 1400 days without a 20% correction, one of it’s longest ever streaks.

The Shiller PE ratio is 78% higher than it’s historical average: 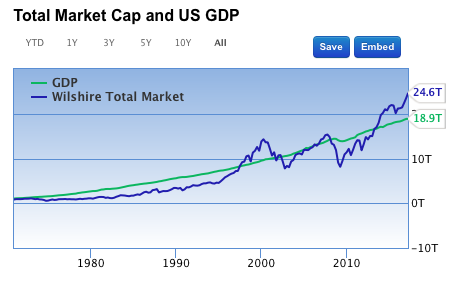 Buffett calls this indicator “probably the best single measure of where valuations stand at any given moment.”

At the current moment, the measure indicates that the US stock market is positioned for an average annualised return of -0.8%.

Negative returns in other words, even after dividends.

So, advice to put your money into the market at this point is foolish, bordering on irresponsible.

As we learnt recently from Peter Lynch, at some point the market will go down. It’s not a case of ‘if’ but when.

We also know that recessions typically occur once every six years. At least they have done since the end of World War Two.

Finally, there is the incredible statistic that a big percentage of the markets gains and losses can be attributed to individual outlier days. Missing those days can drastically improve or hurt your overall performance.

Professor Seyhun from the University of Michigan proved this by analysing 7,802 trading days between 1963 and 1993. He concluded that just 90 days generated 95% of all the years’ market gains. That’s an average of just three days per year.

By missing the 40 days with the biggest losses you would have made a staggering 22.19%.

Of course, this type of market timing is beyond the realms of most ordinary investors. But it proves the point that you don’t need to be invested all the time – like the index fund fanatics tells you to be.

Take some risk off the table at the right time and you can come out way ahead!

The Real Problem Is Lack Of Plan

But all told, the real problem this investor has is that he has no plan.

It is perfectly acceptable to invest in the market at new highs if you have a plan and low cost index funds are the perfect vehicles for the majority of investors.

A dollar cost averaging approach where you invest regular amounts into a diversified set of assets is probably the safest and best way to ensure growing returns.

However, this investor does not have any such plan.

He sold early and now something inside is telling him to jump back into the market. That voice is the Fear Of Missing Out, an extension of the emotion greed. He appears to be investing by the seat of his pants.

He would do better to formulate a plan then wait patiently for the next correction.

With interest rates set to rise, it should not be too long before we see it.

Let me know what your thoughts are in the comments below.