Buying The Ten Most Shorted Stocks On The Nasdaq

Some investors focus on momentum stocks. Some look for value. Contrarian traders search out for the most hated or worst performing stocks.

Recently, I came across the following graphic from Bloomberg which shows the 2017 performance of the 10 most shorted stocks in Asia:

As you can see, if you had invested an equal amount of money into each of the 10 most shorted stocks in Asia in 2017 you would be well ahead.

Although a big chunk of the gains came from China Evergrande which is up 553%, this is a contrarian investors dream.

Considering the strong performance of these stocks I thought it would be interesting to see whether this has historically been a worthwhile strategy.

Investing In The Most Shorted Nasdaq Stocks

To test this strategy I obtained some short interest data for US Nasdaq stocks from WallStreetCourier going back to 2005. I loaded this data into a backtesting program in order to run some simulations.

I looked for the 10 most shorted common stocks on the Nasdaq as measured by the short interest ratio in the prior month. The simulation then purchased an equal $10,000 amount of each stock and held the stock for the next 12 months. This process was repeated each year between 2006 – 2016.

In other words, our simulation buys the 10 most shorted stocks on the Nasdaq each year with an equal amount of capital.

The short interest ratio (SIR) is the ratio of tradable shares being shorted to shares in the market. It is an indirect metric of investor sentiment. When short interest is high it implies company investors hope shares will decline in value.

As you can see from the following table, investing in the 10 most shorted stocks on the Nasdaq between 2006 – 2016 was not a good strategy. 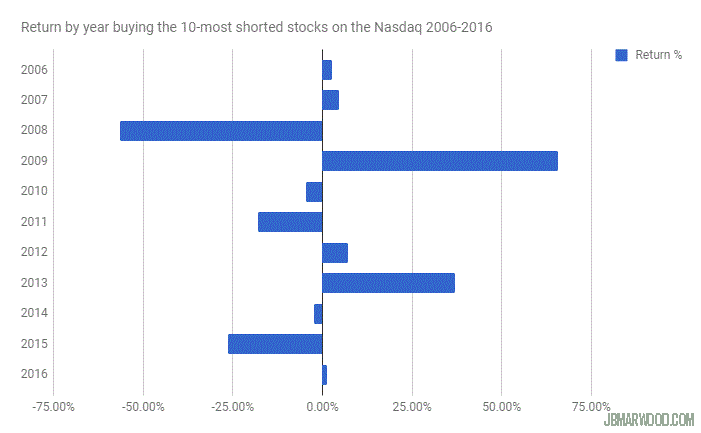 The first two years we saw a small gain to the portfolio of 2.73% and 4.5% respectively.

None of our 10 stocks ended in a profit that year and a couple (Convera Corp and ZipRealty) flirted with bankruptcy.

Overall, $100,000 invested in this strategy at the beginning of 2006 would have fallen to only $64,739 ten years later. This is a much poorer result than simple buy and hold.

The graphic from Bloomberg above implies that a contrarian strategy of simply buying the 10 most shorted stocks has the potential to reap great rewards.

However, we have tested such a strategy on US Nasdaq stocks back to 2006 using the short interest ratio as our guide and we have produced lacklustre results.

As we have shown, the most shorted stocks tend to go down rather than up and this movement is exacerbated during a period of market crisis.

There may well be other contrarian strategies to profit from the short squeeze but this one does not look too promising.

As a result, investors should avoid holding the most shorted stocks in the market simply because they are the most shorted. It turns out there is often good reason why a stock has a high short interest.

Instead, investors should do a more thorough analysis of the companies in question or develop a more robust and effective contrarian system.

Simulations made with Amibroker using data from WallStreetCourier and survivorship-free stock data from Norgate.

Anything extreme is usually dangerous to either health or wallet.
Picking one company from a somewhat opaque economy that has announced it will trim down its 240% debt to suddenly skyrocket? And shareholders are so overjoyed that they pump the price up. Yeah, right.
But I got curious so ran explorations on the US market – without benefit of SIR, just using C.
Have a look at COOL (+661% this year), DVAX(410%) and there’s plenty more in the 100’s%.
However, you are right to say that unless you have a good system to find these stocks, it’s gambling and shortcut to penury.

Good point about seeking out extremes. Thanks for the comment.