It was a good few weeks ago when the stock markets were coming off and everyone was worried about China and the upcoming September FOMC meeting that I first became interested in buying Chinese shares.

The S&P 500 had dropped over 10% in the space of a few days and the Chinese equity markets had fallen around 40% from it’s last 52-week high.

Since I almost always take notice when a major market drops 30% or more, I was quite optimistic that I’d be able to find something to buy amongst the rubble.

So, on the 21st September I decided to initiate a relatively small position in Alibaba shares ($BABA) at $64.02 a share.

“Great!”, I hear you cry. If you look at the chart now, you would think that I’d be sitting on a nice profit.

But I’m not. Unfortunately, I managed to lose money. And although I can think of three or four different excuses. There was only one reason why I lost – I failed to follow any of my investment rules.

As mentioned, the 30%+ drop in Chinese equities got me excited. But it was the tweet below that piqued my interest in Alibaba, in particular: 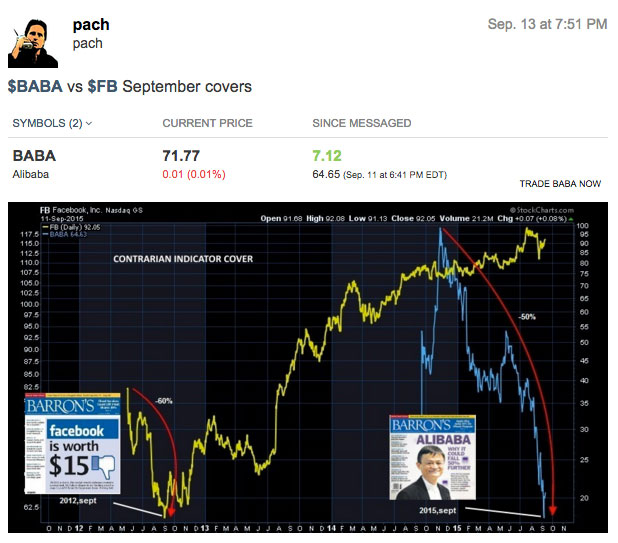 The tweet was posted on StockTwits on September 13th and it shows two covers from Barron’s magazine, one for Facebook ($FB) and one for Alibaba. I’m sure you can see where this is going.

In the example, Barron’s called Facebook as heading to $15 a share just before it started to rally. And now, in September 2015, it was claiming that Alibaba could fall a further 50%.

Thus, I decided to take a closer look at buying Alibaba shares.

One of my favourite strategies for buying shares is to follow trends. Although I look at fundamental analysis in order to get a rough appreciation of a stock’s value, in general, I believe the trend to be the most crucial element.

Which is why I very rarely buy stocks that have fallen heavily. I prefer to wait for at least a short period of upward movement before jumping in since I know it is supremely difficult to try and catch a falling knife.

However, on this occasion I broke a number of my most important rules and I made a speculative trade, looking for a quick and easy profit. Looking back, here’s what I did wrong:

1. I jumped in too early

The first reason why I lost money on Alibaba was that I jumped in too early. Although I felt the stock had fallen too far, and although I was bullish on the company’s future, I should have waited for conditions to improve. The dust surrounding the stock market correction had not even begun to settle and it was plainly clear that there would be more volatility ahead.

I had even stated in a blog post that I did not see the markets making a reasonable bottom until at least October. But I went ahead and bought Alibaba anyway, because I did not want to miss out if the stock did happen to climb.

2. I traded too heavily

Although the first reason might be forgiven under certain circumstances, the second reason cannot be.

Now, I usually buy shares for my longer-term portfolio, but on this occasion I decided to buy Alibaba shares using my shorter-term trading account. I ended up putting far too much risk on the trade.

Even worse, because I was buying too many shares than I should have, I had to put my stop-loss much nearer to the action than I would have liked.

As I said above, this wasn’t a calculated investment, this was just a quick bet looking for an easy profit.

Usually when I invest in shares I put my stop-loss far away from the market, in fact, I normally put my stop as much as 60% away from my entry. And this is because I’ve found that fixed stop-losses nearly always hurt trading performance.

However, on this occasion, and because I bought too many shares in the first place, I had to bring my stop loss much closer to the action.

So I bought BABA at $64.02 a share and then I placed my stop just a few points below the $60 level. This was the biggest mistake of all.

It’s fair to say that this was a completely idiotic play. The trade was not based on any one of my trading rules or strategies.

I got in too early, put on too much risk, held my stop too tight, and didn’t give the trade any time or space to come good.

The trade basically needed to pan out perfectly in order not to lose. As a trader it is important to give yourself some margin of safety but I did not give it a chance.

And yet, if I had held my stop just a little bit lower I would have made a nice profit, and I might even have considered this a good trade.

It just goes to show that no matter how long you’ve been trading for and how many trades you make, you will always be susceptible to falling back, making the same mistakes again, and trading like an amateur.

I guess it is inevitable to some degree. So the most important thing is to just keep on learning and improving.

As it goes, I happen to think that BABA is still a good buy at these levels but I haven’t decided yet whether to buy again or not.

– The Worst £1600 I Ever Made
– Short selling stocks: can you profit?
– Don’t forget to take your profits