Finding the Next Starbucks by Michael Moe Review 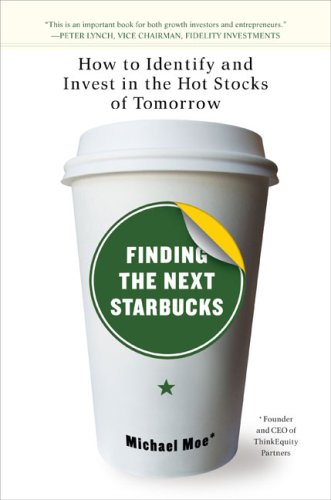 Just picked up ‘Finding the Next Starbucks: How to identify and invest in the hot stocks of tomorrow’ by Michael Moe.

It’s not a very new book, it was actually published in 2006 but I’m finding it pretty good so far. As you might guess, the gist of the book is to try and find the next hot stock; another Starbucks, Amazon or Google. The ten and twenty baggers as Peter Lynch likes to call them.

Finding the Next Starbucks

The author Michael Moe knows what he’s talking about. He’s been on Wall Street for over 20 years and was one of the first research analysts to identify Starbucks as a huge opportunity in 1992. Back then the company was worth around $220 million and today it’s worth over $56 billion, having gone up thousands of percent.

But that isn’t the only impressive stock pick Moe has made over the years and in this book he shows how he goes about looking for similar hot companies or Starbucks-esque ‘supernovas’. For example, he also picked Apollo Group and even called Google cheap at the time of IPO.

Michael Moe strongly believes that if you want to obtain super sized returns you need to look at smaller companies. Moe claims that small-cap stocks are overlooked by Wall Street since they do not have the size to take large volume orders. That represents an opportunity for smaller investors to capitalise on their own knowledge and find the next big company while it’s still in it’s infancy. As the author states, nearly all big companies today were small caps once.

For example: Apple, Gilead Sciences, Nike, Home Depot, Wal-Mart, Cisco, Yahoo!, all these stocks began with a market cap (at IPO) of less than $1 billion.

After going through the book it’s clear that although Moe likes smaller companies that does not necessarily mean penny stocks. In general, it seems that Moe finds his best success stories in the small-cap range – between $200 million to $1 billion or there abouts. The reason for this is clear. Small-cap stocks outperform large stocks over time. For example $10,000 invested in small caps in 1973 would have been worth over $1 million dollars in 2005 (an annual gain of 16.3%) while $10,000 invested in large-cap stocks would have yielded only $127,963 (8.6% annual return).

One of the things Moe is keen to stress in the book is that finding the next Starbucks or Apple stock does not come down to luck. Rather it comes down to a lot of research and by using a system that he has honed over the years.

The essence of which is to find companies in their infancy that possess some key characteristics.

Firstly, Michael Moe suggests that earnings are the most important criteria by which to assess a stock and that a stock price will move in direct relation to it’s earnings over time (a fact the author repeats throughout the book).

Second, Moe talks about the ten commandments that govern his search process. These cover the long-term and short-term outlook of the company, the valuation, the management and the industry it operates in.

Moe then writes about the 4 Ps that help him come to an investment decision. Which are:

Essentially then, Moe looks for companies with great people and he considers good management to be the biggest factor in finding ‘supernova’ stocks.

The company’s product must also be good. It must be unique and hard to replicate elsewhere and it could well be causing a stir among those who have come across it.

Potential is all about the opportunities for open-ended growth of the company. And this also comes down to global trends or as Moe puts it ‘megatrends’.

Finally, predictability means taking a professional, value approach to investing and minimising risk. Trying to find companies that in their short histories have been able to consistently drive up their revenue.

Without going too much further into the book, another key concept that Moe puts across in ‘Finding the Next Starbucks’ is the impact of ‘megatrends’, a term first coined by John Naisbitt. Moe gives several examples of these:

The Agrarian economy in the 18th Century, the Industrial revolution, the manufacturing boom around 1910, the services era in the 70s and the information economy brought on by the invention of the Internet.

Moe claims that we now exist in a knowledge megatrend and that knowledge jobs such as IT, health and business services will excel. The key is to study the world, look at what is happening and what people are talking about. Look at the things that are really changing people’s lives and where the money is flowing.

If the past is anything to go by, looking for a megatrend and hitching a ride seems like the surest way to get on board a tenbagger supernova and reaping the rewards.

All in all ‘Finding the Next Starbucks’ is an excellent book for stock pickers and written in a similar vein to Peter Lynch’s One Up on Wall Street or Chris Camillo’s Laughing at Wall Street. It’s easy to understand, somewhat inspiring, and a great read for those looking for small high growth stocks. While this book should not be number one on the list for new traders or investors it’s definitely quite high up.