Charlie Munger And His Mental Models

Although I love to test trading systems and write about new trading ideas the last couple of months I have been doing a lot of reading about Charlie Munger and his mental models.

Mental models, in essence, are ideas or concepts that help us understand how the world works. Concepts such as the confirmation bias, availability bias, hindsight bias and regression to the mean.

I’ve found that learning about these concepts can really help improve all areas of your life including trading and investing.

Charlie Munger And His Mental Models

I first learnt about mental models from reading about Warren Buffett’s business partner Charlie Munger and who Bill Gates called “the broadest thinker he’s ever encountered.”

According to Charlie Munger, it’s important to have a ‘latticework of mental models’ with which to hang your ideas and experience.

The world is complicated so you can’t rely on just remembering facts, you need to have multiple models from all different disciplines in your head.

By studying the major ideas from all the big subjects we can go a long way in a short amount of time and greatly improve our knowledge of the world.

Although it’s sounds difficult at first, each model is quite straightforward and learning about each one can be fun too.

Here’s a great talk that Munger gives which better explains what he means:

“Well, the first rule is that you can’t really know anything if you just remember isolated facts and try and bang ’em back. If the facts don’t hang together on a latticework of theory, you don’t have them in a usable form.

What are the models? Well, the first rule is that you’ve got to have multiple models because if you just have one or two that you’re using, the nature of human psychology is such that you’ll torture reality so that it fits your models, or at least you’ll think it does…

And the models have to come from multiple disciplines because all the wisdom of the world is not to be found in one little academic department. That’s why poetry professors, by and large, are so unwise in a worldly sense. They don’t have enough models in their heads. So you’ve got to have models across a fair array of disciplines.

You may say, “My God, this is already getting way too tough.” But, fortunately, it isn’t that tough because 80 or 90 important models will carry about 90% of the freight in making you a worldly wise person. And, of those, only a mere handful really carry very heavy freight.”

So what are the most important mental models?

Well, as Charlie Munger says, there are at least 90 mental models out there but there a few carry most of the freight.

After I got interested in the subject, I decided to come up with the most important mental models as related to trading and finance, as this is where my passion lies.

After plenty of research, and after drawing on the work of other famous thinkers (thinkers such as Daniel Kahnemann, Richard Feynman, Warren Buffett and Benjamin Graham) I’ve come up with a list that includes over 20 models.

Models such as the availability bias, regression to the mean, hindsight bias, the confirmation bias, Bayes’ Theorem, margin of safety and lots more…

Learning about these mental models can help you to make better investment decisions and avoid errors. I learnt so much from this process that I decided to compile all the models into a course. 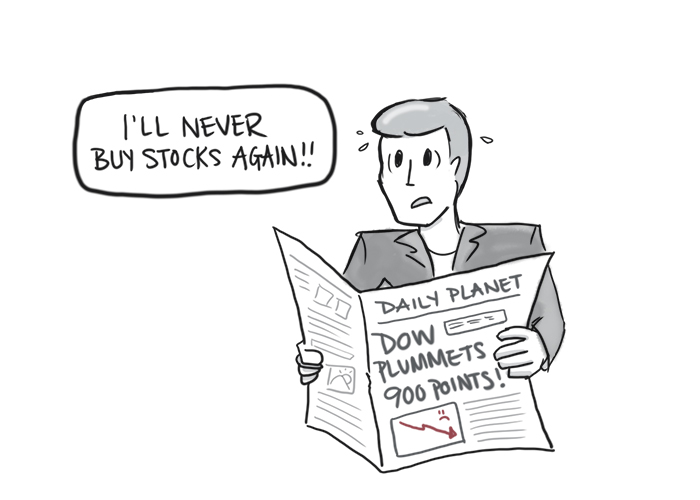 The availability bias, for example, says that we often misjudge the frequency and magnitude of events that have happened more recently.

We forget about past events easily unless they occur in a vivid narrative.

In trading, this might cause us to forget about past trading results and only concentrate on our last few trades.

And this can cause problems because it can lead to short-termism and ‘system hopping’ – where we discard valuable trading strategies too early because of flawed information.

Another problem caused by the availability bias is that it can distort the accuracy of our probabilities. If we remember vivid narratives (such as a financial bubble) they might appear more probable than reality would suggest.

Regression to the Mean Regression to the mean, meanwhile, is a mental model that says extreme outcomes are often followed by moderate ones.

Daniel Kahnemann shows this model explicitly in his book Thinking Fast and Slow where he talks about a story of observing flying performance in the Israeli air force.

In trading, regression to the mean is also particularly important because it shows how you should treat long losing or winning streaks with a pinch of salt.

Your performance is always liable to snap back towards the average. 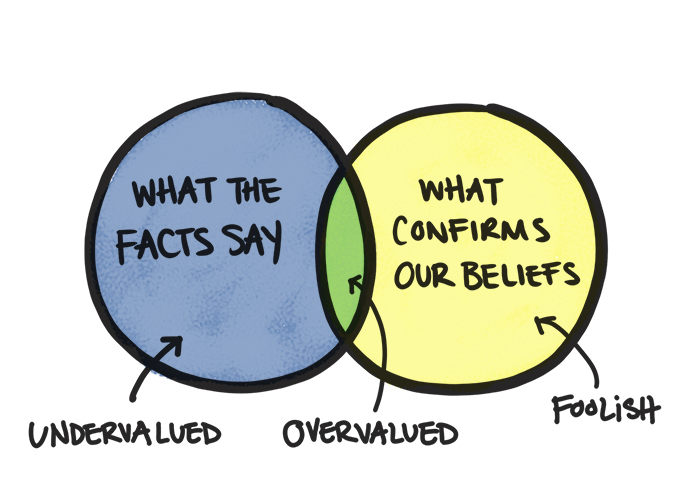 I also talk about confirmation bias in the course, another important mental model.

Detailed because of the ramifications for successful investing, confirmation bias reveals how we often seek out information that is based on prior judgements or beliefs.

In short, instead of looking at all the available information with an open mind, we choose to ignore the stuff that does not sit well with our original opinion.

I suspect this is because – like Danny Kahnemann says – our ‘fast’ brain prefers simple solutions to complex ones.

Consider the investor who buys a stock simply because he likes that company’s products, paying no consideration to the share price or other fundamentals. Even after reading a damning research piece, the investor still goes ahead and purchases the stock, ignoring the opposing information.

The confirmation bias is a very real problem for us humans and something that many great minds have struggled with.

Charles Darwin used to say that whenever he ran into something that contradicted a conclusion he cherished, he was obliged to write the new finding down within 30 minutes.

And Charlie Munger said he never allows himself to have an opinion on anything that he doesn’t know the other side’s argument better than they do.

Once again, Charlie Munger and his mental models can teach us a hell of a lot about making better decisions. 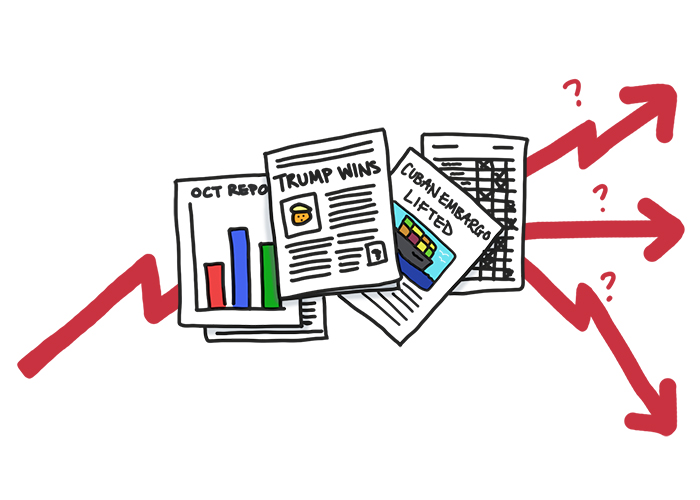 The concept of Bayes Theorem is another great mental model for the traders toolbox.

This is a model that we can use to make better predictions and to improve our processes.

The Bayesian approach can be applied to probability like so:

Take the odds of something happening, then adjust for new information.

As Shane Parrish states “this is most useful in the cases where you have strong prior knowledge.If your initial probability is a long way off, the Bayesian approach is much less helpful.”

One way you might start is to ask yourself the following question: What needs to happen for a prediction to come true?

You can start by coming up with a plausible probability range or base rate.

For example, you might say something like “based on the government information that’s available I am 95% confident that the probability is between 60-80%”.

Or you might say, “well, the betting markets suggest a probability of 30% so I will use that as my base rate for now”.

You can use these probability values as your base and then use the idea of Bayes Theorem to further improve your accuracy. By adjusting for new or more relevant information you can get to a more accurate probability.

There are great examples of this in finance.

“The probability of the Federal Reserve raising interest rates this month is shown in the bond markets as 50%. Janet Yellen just said that inflation has increased more than expected. The probability of a rate hike must now be slightly higher so you can adjust your odds accordingly.”

Bayes Theorem has another implication for traders.

For example, if you gather data about your trading strategy you can start to implement gradual changes based on your findings.

You might find out, for example, that your strategy is better suited to certain markets or timeframes.

By taking a Bayesian approach to investing (and to life) you gain more information about what is working and learn to feed that back into your approach – creating a virtuous cycle.

I hope that this quick article has given you a taste for mental models and how they might be of benefit to you.

There are many more mental models out there and I detail many of them in my course Mental Models For Wall Street.

The models are specifically selected for those of us with an interest in finance and investing and I’m sure they will teach you a thing or two about the world.

Thanks for the great blog post Joe. This is a really fascinating concept, and I suspect most traders don’t pay enough attention to it. Something like this that applies Charlie’s wisdom in an actionable context for traders is a wonderful idea. I’m very happy to have found this today and I have enrolled.

Thanks Jay. Glad you have enrolled and hope you enjoy it. Cheers.

Marwood, I was trying (desperately) to get your course a few days ago (for free)… for some reason, I just couldnt do the check out. I’ve emailed udemy several times and they say it’s on my end (with my browser) that i needed to clean the cookies (or whatever this is called). So I finally figured out how to do this, and now as I’m ready to try again but the Free discount isn’t available anymore.

Could you please extend to for me. I would really appreciate it. I’m SO interested in this course. If I could I would buy it right away but my finances are limited at the moment.