Quite a while ago, I wrote a piece on Seeking Alpha titled 16 reasons to buy GM stock. This was before we had the news story and legal case about GM faulty ignition switches and since then General Motors $GM shares have continued to slide, reaching a price of $33.63 today.

The faulty switches will lead to the recall of hundreds of thousands of GM vehicles, and the firm will be slapped with the maximum fine allowed by law of $35 million.

On a pure valuation basis, however, the shares look even cheaper at this level and after an analysis of US large cap stocks (stocks with market capitalisations of more than $10 billion) GM stands out as offering value for traders. The question is whether or not there are any more surprises under the bonnet from this famous car maker. 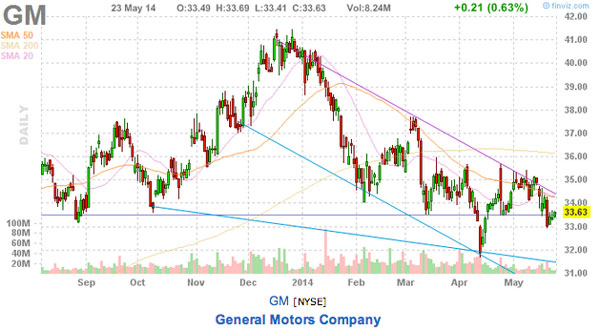 The most important consideration when looking at any stock is the health of that company’s finances. Has that company got it’s finances in shape and is it in a place where it can consistently grow earnings per share?

GM’s finances look particularly solid now that it has successfully moved away from government control. PE is reasonable at 18.08 with a forward PE of just 7.06. Current ratio is 1.30, ROE is 19.90% and there is a good dividend on offer of 3.57%. Additionally, I find that PEG’s less than 1 have a high correlation with strong performance and GM’s PEG is 0.85 at the time of writing.

It’s also worth noting, that despite the faulty vehicle recalls, hedge funds and analysts are still bullish on GM’s chances this year. RBC Capital Markets reiterated its outperform rating on the stock last month and put on a price target of $46. Meanwhile, hedge fund traders Kyle Bass and David Tepper still hold sizeable investments. Some big holders, however, notably Warren Buffett, have moved to sell some if not all of their holdings.

While GM stock seems to offer value, legal implications could continue to cause short term volatility and that adds to the risk associated with the stock.

Against that, we have a company very cheaply valued and now free from the burden of government ownership. Indeed, now that GM has shed it’s government ties the treasury has also stopped selling it’s shares. That gives GM shares a lot more space and this can be seen in the way GM stock has hold up over intense pressure over recent weeks.

Another thing to note, is the $31 billion deferred tax asset that GM should receive this year, something many investors may have overlooked.

A conservative DCF (discounted cash flow analysis) suggests that GM could be undervalued by about $3, which doesn’t give traders a huge margin of safety. The financial ratios indicate that GM is cheap, however, the risk of further surprises must balance out much of that value.

Often, when a significant problem is found within a company it can signal many more that are yet to be discovered.

In conclusion then, although GM is good value and I would rather like to be long, I believe it better to urge on the side of caution so I give this stock a NEUTRAL rating and I wont buy GM stock at this time.