In a few hours time we will see the United Kingdom head to the polls to decide whether or not to stay in the European Union.

This long-awaited event has dominated the financial news for the last several weeks and drawn opinion from all over the world.

From Barack Obama to George Soros to JK Rowling to David Beckham, nearly everyone has an opinion. That in itself suggests we will see a huge turnout at the polling booths.

Make no mistake, this is an important event with serious economic significance.

However, despite media headlines that this outcome is balanced on a knife-edge, the markets are saying something completely different and I think we are going to get a very strong win for the remain camp when the votes are counted on Friday morning.

What the market is telling us

Last week, I wrote about the implications of a Brexit vote and (based on comments from Janet Yellen and the resulting price action in US equities) I though it be a good time to reduce exposure and take cover in safer haven assets.

Since that time, I have been proved mostly wrong. After the shooting of British MP Jo Cox last week, the polls have seen a shift back towards the remain camp and the chances of a Brexit have gone from 45% to 25% according to odds at Betfair.

So despite what is said in the media, the market is telling us that the remain camp is clearly in the lead with just a few hours to go.

An easy win for the remain camp?

According to the news headlines and the results of certain polls, the Brexit result hangs in the balance.

However, financial markets are telling us that the remain camp is in the lead.

And this seems correct.

I have to say at this point I cannot see anything other than a strong win for remain.

Despite what the polls (notoriously flawed) are saying, and putting aside my own personal views, I do not see enough support for the Brexit vote to carry off a victory.

The majority of world leaders, FTSE CEOs, UK scientists, celebrities, politicians and economists have all come out in support of remaining in the EU while only a handful have done so for the leave camp.  (And those that have supported the leave camp have mostly been disreputable types like Boris Johnson and Nigel Farage).

Most importantly, however, is that all three major political parties (conservatives, labour, liberal democrats) all support remain and they have been campaigning strongly for the vote to stay.

I understand there is political apathy in the UK but I find it almost inconceivable that the British public would vote to leave when the parties that they support and vote in are so strongly against it.

It does not make sense which is why I think we are going to see a heavy victory for the remain vote on Friday.

So where is the value?

Despite my belief that a win for remain is on the cards it is not so easy to find a place of value.

A win for remain would surely boost UK stocks, the British pound and probably global stocks as well.

However, we have already seen much of this rally take place over the last few days so a lot of the value is now priced in.

The British pound, for example, is up almost 6% from last week’s low and is now trading at it’s highest level in 2016. 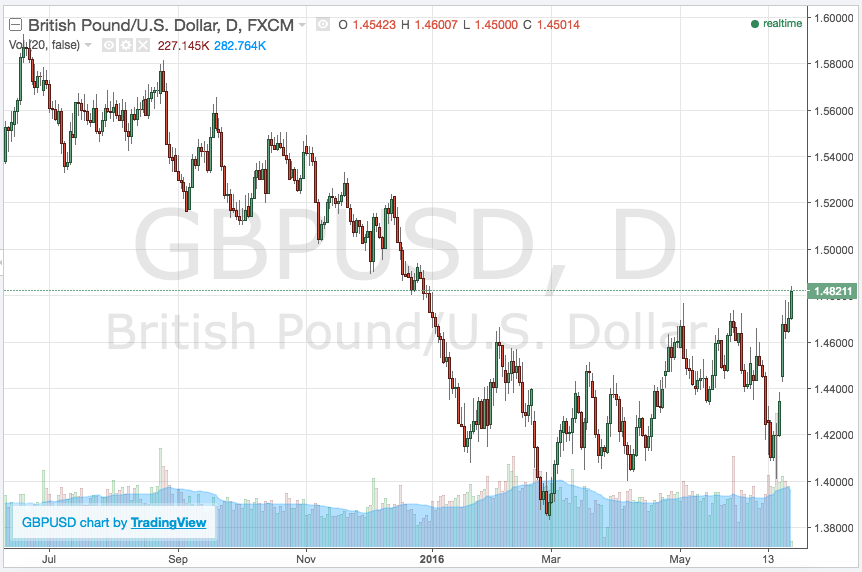 The same can be said for banking stocks with Barclays Plc having rallied 18% over the last five days:

Because of these strong upward moves, if we do get a remain victory, we are likely only going to see a muted response.

Upside is limited – What are the options?

There are several options available for traders to look at but I think the one that offers the most potential is to fade the British pound.

As mentioned above, the British pound has soared over the last few days in the expectation of a remain victory and taken it to it’s highest level since 2015.

Given the economic situation in the UK (Brexit or no Brexit), this move in the pound seems like an over-reaction.

After all, a vote for remain does not solve any fundamental problem for the UK, it just returns the status quo. Yes, it removes some uncertainty but it does not change the picture of a sluggish economy and a dangerous current account deficit.

It seems likely that the pound will continue to move higher as the results are released but after that initial pop I think we will probably see a lot of sellers come back into the market and GBPUSD will likely reverse a lot of those gains.

Of course, there will still be a lot of volatility around so this is a high-risk trade and might be better played using options and with a time horizon of 1-8 weeks.

Overall, I think we are going to see a fairly muted response after the result comes out and that could play out in US stocks too.

Once Brexit is over and the remain camp win, investors will turn their attention back to the US economy and comments from Janet Yellen yesterday continued to suggest weakness.

Thus, US stocks could also see some profit taking, once the Brexit votes have been counted.

But what about a Brexit vote?

Of course, in the event that we actually get a Brexit vote all bets are off. Expect to see sharp losses in global stocks and the pound reversing all of the recent rally and more.