I rarely watch trading content on YouTube but last week I clicked on a forex video that caught my attention.

Soon enough, I had fallen down a rabbit hole.

My feed was taken over by trading videos and in between were advertisements for signal services and chat rooms promising quick and easy profits.

YouTube has become a cesspit of snake oil salesmen and fake trading gurus.

Spoiler alert: trading is not easy and you cannot make millions of dollars in your pyjamas, on your iPhone, whilst simultaneously travelling the globe.

I know it’s hard to believe but it’s true.

The only explanation for all this hustle is that YouTube must have become a fertile breeding ground for fish.

Fish (Noun): An inexperienced or unskilled player, especially such a player who loses significant amounts of money; a live one. 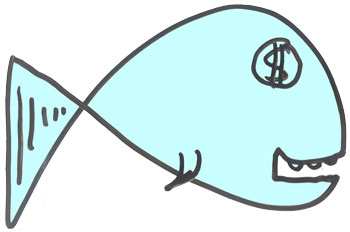 So how can you avoid becoming one?

Let’s start by highlighting some of the shady characters currently doing the rounds on YouTube so you know who and what it is you have to look out for.

Top of the list is the smooth operator who knows all about internet marketing but very little about real trading.

These guys usually broadcast themselves from a beach or New York penthouse with wads of cash spread out on the bed.

They claim that trading is so easy, all you have to do is follow their signals and take their courses and you will become their next millionaire student.

Some of the videos these guys make are so laughable that you think it must be a spoof. You keep waiting for the big ‘reveal’ but it never comes.

Without doubt, the smooth operator is the most dangerous character on YouTube. Many run illegal practices like front running and demo trading.

And they get away with it by using clauses that tell you not to bad mouth their services.

Top prize goes to the guy who pretends to have spoken at Harvard University when in fact the whole thing is a ruse set up by actors and other con artists.

Next on the list is the clueless millennial. These guys mean well but they don’t have enough experience to be talking markets.

The last time the market went down these guys were in kindergarten.

They don’t realise that their strategy (aggressive averaging in) is a ticking time bomb.

Ironically, being born in an era of online means most of these guys got their trading knowledge from, you guessed it, YouTube.

The result is a cyclical regurgitation of stale trading info.

Top prize in this category goes to the guys and gals buying leveraged ETFs and cryptocurrencies on every dip. Because everything goes up eventually, right?

This trader broadcasts his impressive trading abilities for everyone to see via YouTube live stream. He is therefore a shining beacon of transparency and skill.

Apart from being incredibly boring to watch, these traders cause a lot of harm since many of these charlatans are actually operating demo accounts.

New traders (aka fish) see the profits being made on these demo accounts and think that trading is easy and viable. They come to believe that good trading is about watching the market and acting on impulse.

They sign up to signal services and courses then watch their money float downstream.

The chartist might be the most ubiquitous character on YouTube. Sure there is nothing inherently wrong with chart trading and some people can do it well.

The trouble is that chart patterns are entirely subjective and what looks like a spinning wedge to me may look like a neck and armpit to you.

There are literally thousands of videos on YouTube that show you how to trade particular indicators and chart formations.

But they are hardly ever backed up by data.

They never give you concrete rules or tell you how profitable a chart pattern is. Which begs the question, do any of these guys really know what they are talking about?

Lastly, there is the copycat merchant.

This is the guy who manages to piggyback off other people’s content, making themselves look good when really they don’t have a clue.

Top prize in this category goes to the guys who take down a video following a DMCA complaint only to upload another exact copy under a different username days later.

I hadn’t realised the situation on YouTube had become so bad. Good trading content is out there but it’s being swamped by hours of rubbish.

These characters waste your time, send you down the wrong path and cause you to lose money and they don’t seem to care about it.

A lot of the time they get away with it through the use of disclaimers.

Here is one such paragraph buried deep in a disclaimer of a well known YouTube trader:

In others words, these guys are going to show you trades in their chat room but they’re not going to tell you which are real and which are fake.

Even a fool knows this is a bad deal.

So what can you do?

Apart from reading disclaimers, the best thing you can do to avoid being conned is to seek out trading content that is science based, not based on squiggly lines or emotional appeal.

Don’t base your preference on popularity or number of views because there is a clear negative correlation between these things.

Before going on YouTube be aware that a lot of the content is poor and ask yourself whether it’s worth your time.

Instead, look for content that is backed up by data. For example:

Above all, learn by doing.

Good trading is not easy.

Good trading is statistics, process and discipline. Some heavy lifting is required.

Never more truth. And sadly this is on all subjects. The attacks against the Rothschilds, FRB, and US Currency are everywhere. I have done a lot of math on some of these ‘services’ exam $4,600 becomes $406,000 in two years… do the math.

Very very good points, however clickbaiting is far more a indication that there is somethings not right, like videos claiming to make xx$ in xxminutes, as the complete context is missing, its purely a take on greed-fish, sadly however it does work.

Yes you’re 100% right. Clickbait titles is a big give away.

This content is one of the best, thanks, but does it mean the market makers don’t hunt stop lost, and it is advice to yes it always??