Markets Pricing In Very Little Risk – What’s On The Cards For 2017?

As we move into 2017 it’s clear that there are some common themes dominating the narrative. Understanding the consensus view gives us insights into what investors are expecting from the markets.

According to a survey of fund managers by Bank of America Merrill Lynch the majority of investors are forecasting above-trend economic growth, higher inflation and stronger profits.

This is manifesting itself in bets on equities and commodities (most notably oil) and bets against bonds.

The election of Donald Trump has also seen a convincing movement of resources into the financial sector. Many investors see Trump’s cabinet as pro-banking and the prospect of higher interest rates in 2017 adds further incentive for the accumulation of financial services companies.

This is very similar to the thinking regarding oil. Trump is considered as a positive for the energy sector and the inclusion of notable energy executives in his cabinet is likely to directly influence government policy and the flow of resources.

Trump’s plans for increased government spending and his ‘unpredictable character’ could also result in events that could spill over into higher energy prices.

At the same time, interest rates are overwhelmingly expected to move higher, the US dollar is expected to rally with them and Europe is predicted to see further break-up and populist uprising with elections coming up in Germany and France.

The consensus view that interest rates have bottomed and that the bond bubble has popped is convincing given President Trump’s economic plans, the recent price action we have seen in those assets and recent policy statements out of the Federal Reserve.

TLT, an ETF that tracks the 20 Year Treasury Bond, is down 14% since July and in her last press conference, Fed Chair Janet Yellen hinted at rate hikes that suggest at least three 0.25% moves in 2017. 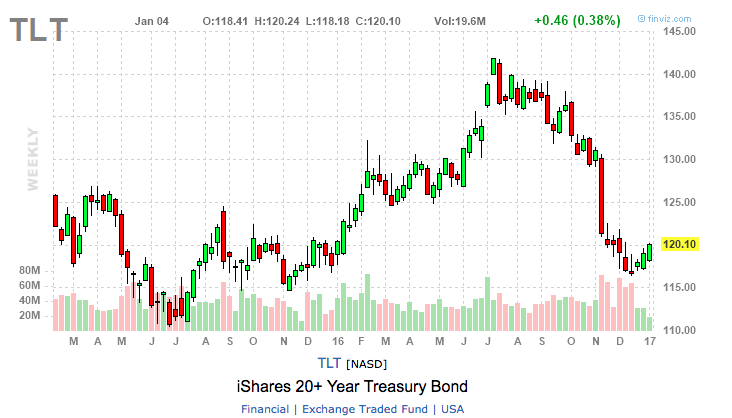 President Trump’s plans to cut taxes and boost government spending is intended to spur economic growth and should drive inflation with it. The Federal Reserve will necessarily want to keep a lid on inflation and will therefore raise rates to stop inflation getting out of hand.

A direct and obvious result of all this is that the US dollar will continue to gain in strength as interest rates are taken higher. Meanwhile in Europe, investors expect continued weakness for the euro with the likelihood of more Brexit-type uprisings in France and Germany.

All of this appears to be the consensus view with markets as they stand.

Problems With The Consensus View

The banking sector, for example, has already seen a huge rally since Trump’s election win. In fact, a large percentage of the Dow’s recent rally can be accounted for by the steep rise in Goldman Sachs shares alone. (See the first chart).

Much of this is based on forecasts for interest rate rises even though it is far from clear how higher interest rates actually translate to higher profits for financials, especially for large investment banks like Goldman’s.

Given this, it could be the case that the consensus view is getting ahead of itself and the recent price rally that we are seeing across the board is in danger of turning into a bubble.

Unless we see some healthy profit-taking and a decent correction, it’s possible that prices will get more out of step and that could lead to more global distortions that could easily turn the consensus view on it’s head.

One thing that is notably missing from the consensus view, for example, is the possibility that increased government spending and tax cuts do little to ignite economic growth.

This is problematic given the budget deficits and national debts faced by Western governments. Such moves may help to further enrich the elite but do little for small businesses.

The biggest problem with the consensus view described, therefore, is that it seems to be pricing in very little risk at present.

As it stands, the stock market is expected to keep up it’s recent momentum and President Trump is now the man expected to do good things for business and the economy.

However, the truth is that Trump was elected to upend the status quo. He has to be considered as a volatile figure and it would therefore be foolish not to expect some volatility and truly unexpected outcomes in 2017.

The current bull market is now eight years in the making and is expensive on most valuation measures. My favourite measures such as Shiller CAPE and Market Cap to GDP are significantly above their historical averages, while US  unemployment is at a 9-year low.

It seems to me that any surprise event that brings volatility could easily derail the consensus view while markets are priced like they are.

For example, if something happens abroad and stocks see a significant correction, that immediately puts the brakes on the Federal Reserve from raising interest rates. This is especially true if inflation stays rangebound.

With interest rates held at their previous lows, all of a sudden bond markets start to look attractive again and the US dollar starts to unwind a lot of it’s recent strength.

As the US dollar falls, assets that are priced in dollars such as gold and oil could start to appreciate.

The best you can do is try and minimise the downside and look for opportunities that offer the best reward for risk.

As appears from all of this, oil seems to be an asset that looks like it could rally in the face of both narratives. And certain assets that are not currently receiving much attention, such as Chinese stocks and gold may also be interesting places to look.

Interestingly, some emerging assets such as Russian equities and the Russian ruble are now highly popular among investors, another consequence of the Trump effect. This seems off-putting considering the risk involved in these markets.

At this point, I am not quite clear where the best opportunities lie for 2017 although I am increasingly drawn towards oil. Just because it’s a new year does not mean we need to rush into any major predictions or allocation of resources.

The only thing I am truly certain of at this point is that the current market is pricing in very little risk. There will be plenty of opportunities in the months ahead.